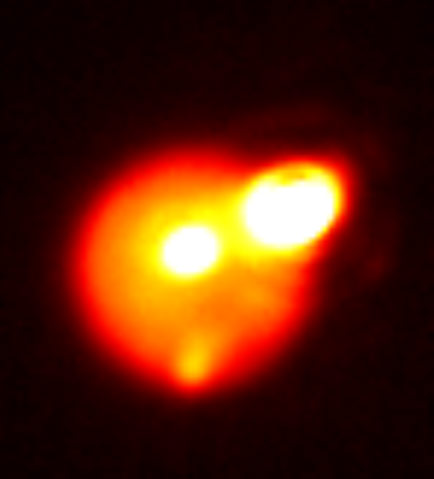 The events are leading scientists to speculate that these outbursts, which can send material hundreds of miles or kilometers above the surface, might be much more common than previously thought.

“We typically expect one huge outburst every one or two years, and they're usually not this bright,” said Imke de Pater, chair of astronomy at the University of California, Berkeley, and lead author of one of two papers describing the eruptions.

“Here we had three extremely bright outbursts, which suggest that if we looked more frequently we might see many more of them on Io.”

Io (pronounced ee-o or eye-o) is about the size of Earth's moon and the most volcanically active planet or moon in our solar system, according to astronomers. It's also the only one with volcanoes erupting extremely hot lava like that seen on Earth. Because of Io's low gravity, large eruptions blast an umbrella of debris high into space.

De Pater's long-time colleague and coauthor Ashley Davies, a volcanologist with NASA's Jet Propulsion Laboratory at the California Institute of Technology in Pasadena, Calif., said the recent eruptions match past events that spewed lava over hundreds of square miles in a short time.

“These new events are in a relatively rare class of eruptions on Io because of their size and astonishingly high thermal [heat] emission,” he said. “The amount of energy being emitted by these eruptions implies lava fountains gushing out of fissures at a very large volume per second, forming lava flows that quickly spread over the surface of Io.”

All three events, including the largest, most powerful eruption of the trio on Aug. 29, were likely characterized by “curtains of fire,” as lava blasted out of fissures perhaps several miles or kilometers long, according to the scientists. The papers have been accepted for publication in the research journal Icarus.

“This will help us understand the processes that helped shape the surfaces of all the terrestrial planets, including Earth, and the moon,” said Davies.