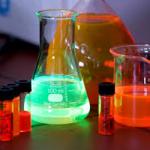 Simple LEGO bricks can be assembled to more complicated structures, which can be further associated into a wide variety of complex architectures, from automobiles, rockets, and ships to gigantic castles and amusement parks. Such an event of multi-step assembly, so-called 'hierarchical self-assembly', also happens in living organisms.

Opinion | The Snake-Oil Salesmen of the Senate

Team preparing for SKA shortlisted for 'Nobel Prize of supercomputing' Health-care leaders say they are finding unexpected wariness among medical workers about taking the novel vaccines, base...