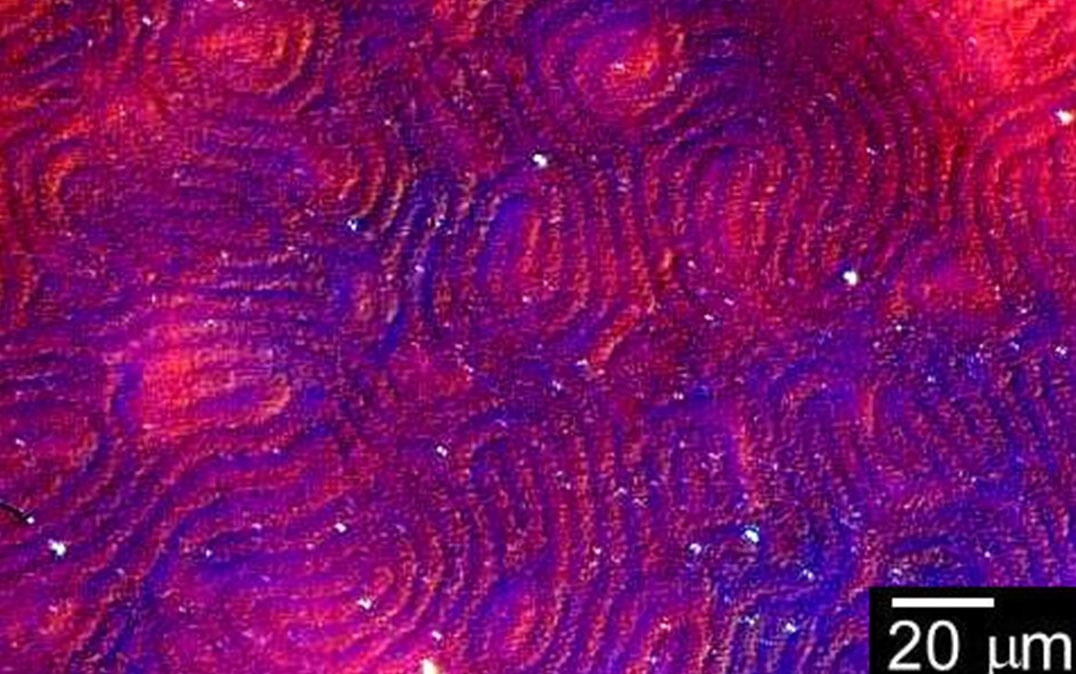 A researcher at the University of Tsukuba develops a method for creating optically active polymers using a helical liquid crystal template, which may allow for future computer and TV displays to operate based on circularly polarized light
Tsukuba, Japan—A scientist from the Faculty of Pure and Applied Sciences at the University of Tsukuba developed a method for producing electrically conductive polymers that assume a helical configuration. By using a liquid crystal as a template, he was able to produce optically active polymers that can convert light into a circular polarization. This approach may help lower the cost of smart displays.
Walking into an electronic store these days can be an overwhelming experience if you happen to wander into the television aisle. The sizes of TVs have significantly expanded in recent years, while the prices have dropped. This is mainly due to the adoption of organic light emitting devices (OLEDs), which are carbon-based polymers that can glow at tunable optical wavelengths. These conjugated polymers, which have alternating single and double bonds, are both electrically conductive, and have colors that can be controlled by chemical doping with other molecules. Their oxidation state can also be rapidly switched using an electric voltage, which affects their coloration. However, future advancement may require new materials that can take advantage of other kinds of optical properties, such as circular polarization.
Now, a researcher from the University of Tsukuba has introduced a technique for creating polymers locked into a helical configuration, using a sacrificial liquid crystal template. "Polymers that both have optical activity and luminescent function can emit circularly polarized light," author Professor Hiromasa Goto says. For this process, the liquid crystal molecules were originally in a straight configuration. The addition of monomer molecules caused the liquid crystals to twist into a helical configuration. This imprints a "chirality" or handedness to the structure, making it oriented either clockwise or counterclockwise. An electric voltage was applied, which triggered polymerization of the monomers. The liquid crystal template was then removed, leaving a polymer frozen in a helical shape. By breaking the mirror symmetry, the polymer has the ability to convert linearly polarized light into a circular polarization. The furan rings in the polymer not only contribute to the electrical conductivity, they also help stabilize the helical structure. "The pi-stacking interactions between the rings allows the polymer to aggregate into a highly ordered chiral system," Professor Goto says. The resulting polymer was tested using circular dichroism absorption spectroscopy and was found to have strong optical activity at visible wavelengths. Future applications of this process may include cheaper and more energy efficient electronic displays.