Astro-QA #5 : Why is Pluto not a planet? How many planets are there in our solar system?

There are eight planets in the solar system: Mercury, Venus, Earth, Mars, Jupiter, Saturn, Uranus, and Neptune. The four inner solar system planets i.e. Mercury, Venus, Earth, and Mars, fall under the category of terrestrial planets; Jupiter and Saturn are gas giants, mostly composed of hydrogen and helium; Uranus and Neptune are called the ice giants. They mostly contain elements heavier than hydrogen and helium.
Pluto, was classified as one of the solar system planets when it was first discovered by Clyde Tombaugh in 1930. But then in 2005, Mike Brown discovered Eris, an icy object thought to be about the same size as Pluto. So the number of planets should increase. Some astronomers also advocated to include Ceres in Astroid belt and Charon, a moon of Pluto, into lists of planets because they are also almost of the same size.
So in 2006 the International Astronomical Union met in Prague and made a tighter definition of planet. According to the new definition a Planet is a celestial body that follows three criteria.
a. is in orbit around the Sun,
b. has sufficient mass for its self-gravity to overcome rigid body forces so that it assumes a hydrostatic equilibrium (nearly round) shape, and
c. has cleared the neighborhood around its orbit.
As Pluto is part of the Kuiper Belt, and therefore has not met the third criterion, it is no longer considered a planet. Instead, it is classified as a dwarf planet. Other dwarf planets include Ceres, Haumea, Makemake, and Eris. It is now considered to be one of the largest known members of the Kuiper Belt. 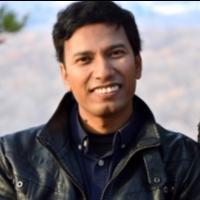