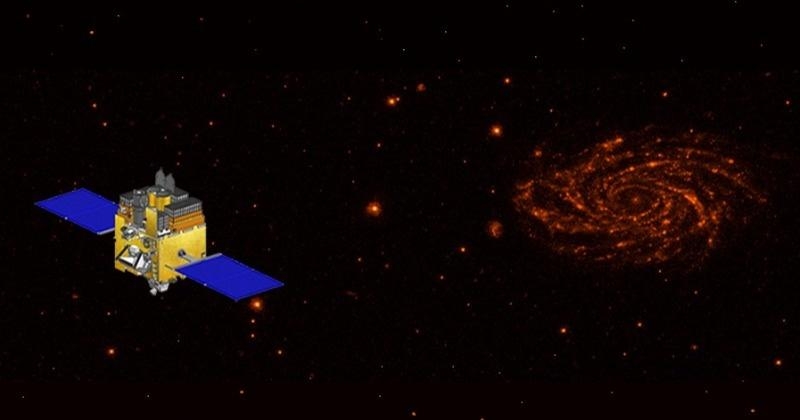 Black holes are the ultimate cosmic enigmas: objects with a gravitational pull so strong that not even light can escape. They are the subjects of intense scrutiny from astronomers from all over the world. But how are these black holes formed? Indian scientists are making great headway in studying black hole births using our very own space telescope – AstroSat.

Black holes are the ultimate cosmic enigmas: objects with a gravitational pull so strong that not even light can escape. They are the subjects of intense scrutiny from astronomers from all over the world. But how are these black holes formed? Indian scientists are making great headway in studying black hole births using our very own space telescope – AstroSat.

One way of forging black holes is the deaths of massive stars in “Gamma Ray Bursts ” – explosions so powerful that they have been called “mini big-bangs”. They send intense jets of light and high-energy radiation shooting across the universe. Another way to create Gamma-ray Bursts (GRBs) is the collision of two neutron stars – the kind of events that generate gravitational waves which LIGO-India will start detecting in the near future. Astronomers study the Gamma-rays and X-rays from such bursts to better understand explosion and black hole formation.

AstroSat is one of the most sensitive space telescopes in the world - consisting of five instruments that can simultaneously study the universe in ultraviolet, optical, and X-ray radiation. One of these instruments is the Cadmium Zinc Telluride Imager (CZTI) - which has just witnessed the birth of black holes for the five hundredth time. “This is a landmark achievement”, said Prof. Dipankar Bhattacharya of Ashoka University and IUCAA, the current Principal Investigator of CZTI. “The wealth of data obtained by CZTI on Gamma Ray Bursts is making a big impact worldwide.”

CZTI has been studying GRBs since it first opened its eyes 6.5 years ago. “The very first scientific result from AstroSat was the detection of GRB 151006A: just hours after the instrument was powered on after launch”, said Prof. Varun Bhalerao, who leads the GRB search effort. Numerous GRB studies from CZTI have been published in reputed journals worldwide. The team has worked continuously to improve the search and detection methods, getting better results every year. A key highlight of the searches is the role played by young scientists in the process: large parts of the search procedures have been developed by undergraduate students, Ph.D. students, and trainees. They are also the group responsible for daily analysis of data. Ph.D. student Gaurav Waratkar says, “It is very exciting to work on this. Every time we look at the data, I am tantalised by the possibility of discovering a signal that originated billions of light years away!”

A unique aspect of CZTI is the ability to measure the “polarisation” of X-rays: an ability that is lacking in flagship missions like NASA’s Neil Gehrels Swift Telescope or the US-Europe Fermi Space Telescope. Tanmoy Chattopadhyay (Stanford university) plays a key role in these polarisation studies. Tanmoy says, “Polarisation tells us what is happening just outside the newly formed black hole. It is the most important measurement to distinguish between different theories of Gamma-ray Bursts”.

CZT–Imager is built by a consortium of Institutes across India. The Tata Institute of Fundamental Research (TIFR), Mumbai, led the effort with instrument design and development. Vikram Sarabhai Space Centre (VSSC), Thiruvananthapuram provided the electronic design, assembly and testing. The U R Rao Satellite Centre (URSC), Bengaluru provided the mechanical design, quality consultation and project management. The Inter University Centre for Astronomy and Astrophysics (IUCAA), Pune did the Coded Mask design and instrument calibration, and runs the Payload Operation Centre. Space Application Centre (SAC) at Ahmedabad provided the analysis software. Physical Research Laboratory (PRL), Ahmedabad, provided the polarisation detection algorithm and ground calibration. The Indian Institute of Technology Bombay (IITB), Mumbai leads the search and study of Gamma Ray Bursts, working closely with the Payload Operations Centre at IUCAA. A vast number of industries participated in the fabrication and the University sector pitched in by participating in the test and evaluation of the payload. The Indian Space Research Organisation funded, managed and facilitated the project.