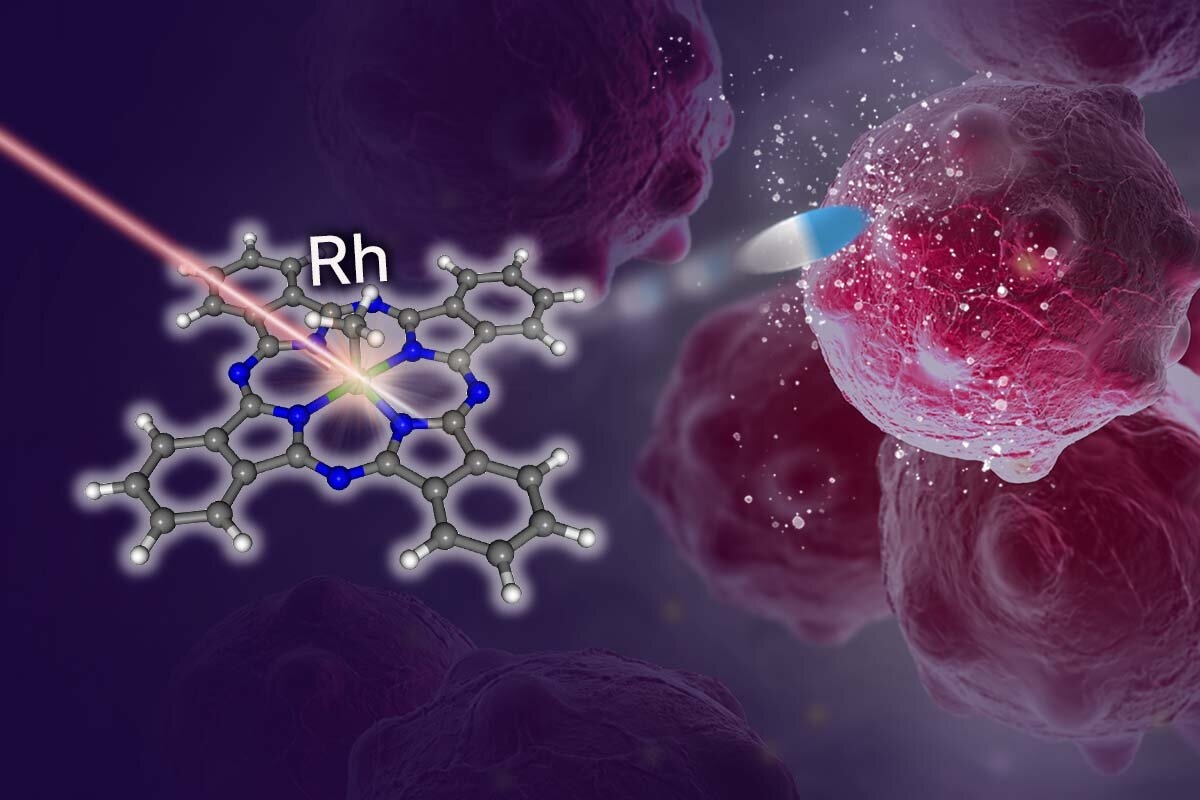 One approach to treating cancer is photodynamic therapy using photo-uncaging systems, in which light is used to activate a cancer-fighting agent in situ at the tumor. However, suitable agents must be stable under visible light, have an anti-tumor effect in low-oxygen environments, and have the ability to be activated by low-energy tissue-penetrative red light - a combination of properties that is difficult to achieve. Now, a team from The Institute of Industrial Science at The University of Tokyo has developed a new platform that uses, for the first time, organorhodium(III) phthalocyanine complexes to achieve this combination of traits.
Conventional photodynamic techniques depend on the formation of reactive oxygen species to destroy tumor cells, but many tumors contain environments that lack oxygen. Photo-uncaging systems, where the agent is administered in an inactive form and then activated, or "uncaged", in the location of the tumor, address this issue. They uncage alkyl radicals, which are known to be capable of inducing cell death both with and without the presence of oxygen. Alkyl radicals are converted into terminal aldehydes in the presence of oxygen, and these terminal aldehydes can also induce cell death. The team used molecules called "organorhodium(III) phthalocyanine (Pc) complexes" to develop, for the first time, a novel platform for photo-uncaging therapy.
"The organorhodium(III) phthalocyanine (Pc) complexes we developed are highly stable under ambient light during the processes of synthesis, purification, and measurement, but can be activated by a laser that gives out nanosecond pulses of red light," explains lead author Kei Murata. These nanosecond-pulsing lasers (pulsing for a billionth of a second) are relatively easy for medical staff to handle.
They went on to show that the compounds that were released after the organorhodium(III) phthalocyanine (Pc) complexes were activated showed toxicity to HeLa cells, a cell line developed from cancer, indicating that these compounds would have the ability to fight cancer if released inside a tumor.
"Our new technology could allow the photochemical generation of a wide variety of alkyl radicals and aldehydes, making possible the site-selective release of various bioactive molecules," says senior author Kazuyuki Ishii. As an improvement on other photo-uncaging systems, it opens an exciting new avenue for the treatment of cancer by phototherapy.