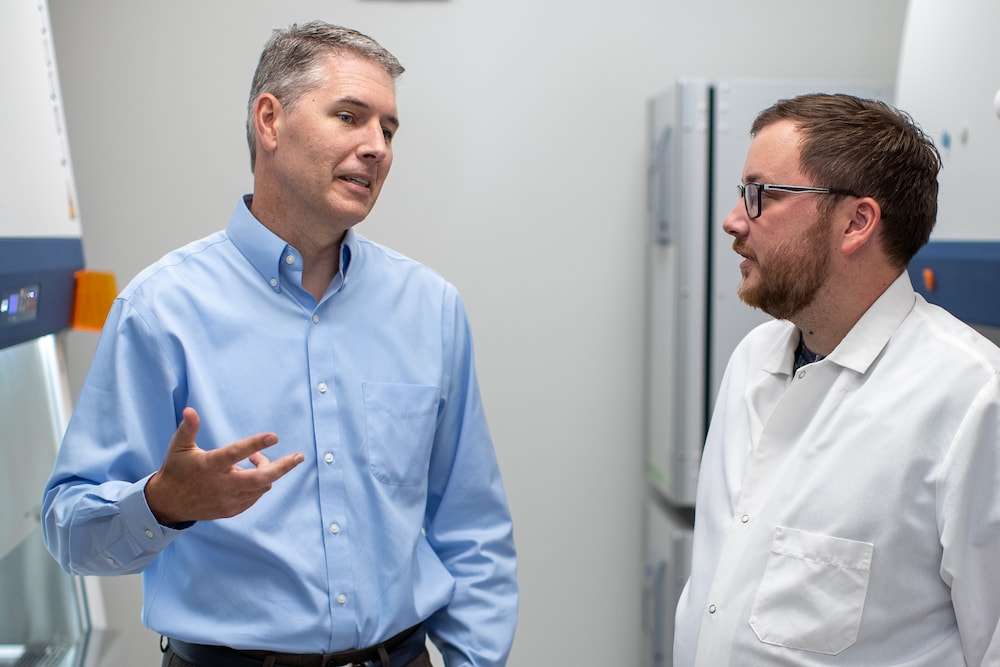 The longer the bootcamp, the better the antibodies

LA JOLLA, CA—Researchers at La Jolla Institute for Immunology (LJI) have discovered how the immune system can transform into an antibody-making machine capable of neutralizing one of the most elusive viruses out there: HIV.
Researchers once thought that B cells (which make antibodies) spent only weeks perfecting their weaponry against viral threats. Now LJI research shows that a “slow delivery, escalating dose” vaccination strategy can prompt B cells to spend months mutating and evolving their pathogen-fighting antibodies.
This finding, published in Nature, is an important step toward developing effective, long-lasting vaccines against pathogens such as HIV, influenza, malaria, and SARS-CoV-2.
“This shows the immune system can do really extraordinary things if you give it the opportunity—and that in some vaccine contexts, patience really is a virtue,” says study senior author LJI Professor Shane Crotty, Ph.D.

The immune cell evolution inside you

Most pathogens look alien to the immune system. They’re unwelcome visitors covered in unfamiliar proteins. When the body’s dendritic cells see these strange proteins, they signal to “helper” T cells to start training an army.
B cells get the signal that an invader is near, and they are shown a molecular marker (called an antigen) from that invader. B cells want to make effective antibodies to neutralize the invader, so they head to a special place: germinal centers.
Germinal centers are microscopic structures that form in special “lymphoid tissues” throughout the body. Germinal centers are critical for fighting pathogens because they give B cells a place to mutate and test out their antibodies. Researchers call germinal centers the “engines of antibody evolution.” B cells that don’t mutate and improve their antibodies over time are eliminated. B cells with useful mutations get sent out into the body to wage war.
“It really is evolution,” says Crotty. “This process can work incredibly well and lead to antibodies that become a thousand times better at binding the virus.”

Germinal centers are also the original pop-up shops. Once the threat has passed, the germinal centers collapse. No one knows yet exactly why germinal centers collapse, but there must be some kind of molecular signal that spells the end.
For Crotty’s lab, a big question is how to get germinal centers to stay open longer. Timing is important because some pathogens can only be neutralized by rare, highly specialized antibodies.
HIV is one such tough customer. HIV is covered with an invisibility cloak of sugar molecules, and the virus can change its shape as it enters cells. This stealth and this shape-shifting power makes it really hard for immune cells to spot useful antigen targets on HIV.
As a result, germinal centers start pushing out B cells that make “low affinity” antibodies. These antibodies cannot bind and neutralize HIV in a very effective way. Instead of throwing a wrench into the HIV machinery, the body just tosses in cotton balls.
HIV’s shifting structure can also lead to “high affinity” antibodies that can bind really tightly—onto the wrong targets. Imagine them trying to stop a raging bull by shooting it in the tail.
Crotty thinks B cells just need more time to mutate. “It takes a long time, and many cell divisions, before you just get lucky and one of the right mutations finally happens,” Crotty says. The idea is that the longer B cells can mutate and perfect themselves in germinal centers, the more likely that the B cells will luck into producing broadly neutralizing antibodies against HIV.

For years, Crotty and his collaborators in the LJI Center for Infectious Disease and Vaccine Research and the Scripps Research-led Consortium for HIV/AIDS Vaccine Development (CHAVI-ID), have worked to solve pieces of the HIV vaccine puzzle. The Crotty Lab has co-led pivotal studies into the use of promising new vaccine ingredients and how to best activate B cells against HIV.
The new study shines a light on the importance of stretching out the period where B cells can evolve in the germinal centers.
For the study, research collaborators at the Tulane National Primate Research Center gave rhesus monkeys immunizations every two days for 12 days. The series of seven shots contained an “escalating dose” of the HIV antigen (the protein on HIV they wanted the immune system to learn to target).
“That pattern mimics a natural infection more so than just a single immunization,” explains LJI Postdoctoral Fellow Harry Sutton, Ph.D., who served as co-first author of the new study with former LJI Instructor Jeong Hyun Lee, Ph.D., now a senior scientist with the IAVI Neutralizing Antibody Center at Scripps Research.
One group of monkeys wasn’t vaccinated again, but two other groups received a booster vaccine after 10 weeks.
The researchers then tracked immune responses by examining monkey lymph nodes. The team also monitored B cell development in individual germinal centers. Their work revealed that the germinal centers stayed active and B cells continued to evolve for six months after the initial seven-shot series. As Sutton points out, the study was set to end after six months, but the germinal centers may have lasted even longer if the research had gone on.
So how did the highly evolved B cells measure up? The researchers performed a genetic sequencing analysis to analyze immune cell memory and antibody binding abilities.
They found that the monkeys given the seven-shot series but never boosted had a stable and durable population of anti-HIV antibodies after six months. These non-boosted animals also had more immune cells (T follicular helper cells) ready to recognize the HIV antigen and launch B cells into battle. The boosted animals did have a second “peak” in antibody numbers after their booster shot, but they didn’t end up with the same high-quality antibodies.
The slow delivery, escalating dose strategy had paid off. The large dose of antigen had likely given the immune system enough of a “taste” of the virus that the germinal centers were ready to stay open and the B cells were prompted to evolve for as long as possible to address the perceived threat.

Next steps for better vaccines

When it comes to vaccinating against HIV, it appears that timing really is key to long-term protection. Giving vaccine boosters too early may interrupt an already effective process. “You want to get the immune response started, and then let it do its job,” says Crotty. “Let it try and undergo as much antibody evolution as it can before you come back with a booster immunization.”
Of course, a 12-day, 7-shot regimen would be impractical for most people. “If you want to give an HIV vaccine out to people in an area where they’re heavily affected by the virus, which is mainly sub-Saharan Africa, you can’t expect people to come in every two days for a vaccine for two weeks,” says Sutton. “So how can we recreate these findings using fewer vaccinations?”
The team is now looking at whether they can achieve the same antibody quality with two vaccines, versus seven. They are also studying whether they can design an mRNA vaccine that sparks the same B cell evolution by slowly producing antigen over time. This follow-up work is being supported through significant funding from the Bill & Melinda Gates Foundation.
Long-lived germinal centers may also prove important for fighting COVID-19. As Crotty explains, the original COVID-19 vaccines did an excellent job of getting the body to quickly make high-affinity antibodies against the initial SARS-CoV-2 variants. Research from the Crotty Lab suggests B cells against SARS-CoV-2 keep evolving for at least four months, giving them the chance to become even more effective.
Unfortunately, there is a decline in antibody protection against the more recent SARS-CoV-2 variants, such as Omicron and Omicron BA.1. Crotty is very interested in investigating how a long vaccine delivery method might help.
“Our new study suggests that if you want to get really good neutralizing antibodies against variants, these long germinal centers are probably the way to do it.”

"The longer the bootcamp, the better the antibodies", MachPrinciple, September 23, 2022, https://machprinciple.com/post/The-longer-the-bootcamp-the-better-the-antibodies