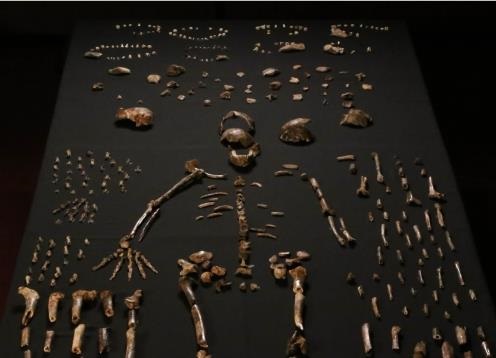 More than 1,550 pieces of fossilized bone have turned up in a remote cave chamber in South Africa, representing what some scientists say is a previously unknown species of human.

The species, dubbed Homo naledi, seems to have intentionally put bodies of its dead in a remote cave chamber, making it perhaps the oldest known case of such a behavior among humans or their close evolutionary relatives, researchers said.

The cave chamber was so hard to reach that it required recruiting a team of six very thin scientists, all women, to get inside.

Scientists at the University of the Witwatersrand in South Africa, the National Geographic Society and other institutions announced the findings Sept. 10. They are described in two papers in the research journal eLife.

The discovery is the largest trove of fossilized human bones known in Africa, researchers said.

But some disputed whether the bones are definitely a new species. “The few ‘unique' features that potentially define the new species need further scrutiny,” Christoph Zollikofer, an anthropologist at the University of Zurich, told Britain's The Guardian newspaper. Some suggested the fossils look like they come from the already known species Homo erectus.

According to the scientists behind the report, they first discovered the fossils in 2013 while working with volunteer cavers in a cave known as Rising Star in the Cradle of Humankind World Heritage Site, some 50 kilometers (30 miles) northwest of Johannesburg.

The fossils, still undated, lay in a chamber about 90 meters (some 100 yards) from the cave entrance. So far, the team has recovered parts of at least 15 individuals of the same species, a small fraction of the fossils believed to remain in the chamber.

“With almost every bone in the body represented multiple times, Homo naledi is already practically the best-known fossil member of our lineage,” said Lee Berger of the Evolutionary Studies Institute at Wits University and a National Geographic Explorer-in-Residence, who led two expeditions that found and recovered the fossils.

“Overall, Homo naledi looks like one of the most primitive members of our genus,” or evolutionary branch, said John Hawks of the University of Wisconsin-Madison, a senior author on the paper describing the new species. “But it also has some surprisingly human-like features.”

“H. naledi had a tiny brain,” about the size of an orange, and a very slender body, he added. The research found that on average H. naledi stood about 1.5 meters (about 5 feet) tall and weighed about 45 kg (almost 100 pounds).

H. naledi's teeth are described as similar to those of the earliest-known members of our genus, such as Homo habilis, as are most features of the skull. The shoulders, however, are more like those of apes. “The hands suggest tool-using capabilities,” said research team member Tracy Kivell of the University of Kent, U.K. “Surprisingly, H. naledi has extremely curved fingers, more curved than almost any other species of early hominin, which clearly demonstrates climbing capabilities.” Hominins are an evolutionary group consisting of humans and their close relatives.

This contrasts with the feet, which are “virtually indistinguishable from those of modern humans,” said William Harcourt-Smith of Lehman College at the City University of New York, and the American Museum of Natural History, who led the study of the feet. Its feet, combined with its long legs, suggest that the species was well suited for long-distance walking. “The combination of ana tomical features in H. naledi distinguishes it from any previously known species,” added Berger.

That cave chamber has “always been isolated from other chambers and never been open directly to the surface,” said Paul Dirks of James Cook University in Queensland, Australia, lead author of an eLife paper on the context of the find. “The remains were found practically alone in this remote chamber in the absence of any other major fossil animals,” one of several features taken as clues that the site served as a burial place.