Astronomers observe two stars about to merge into a supermassive star 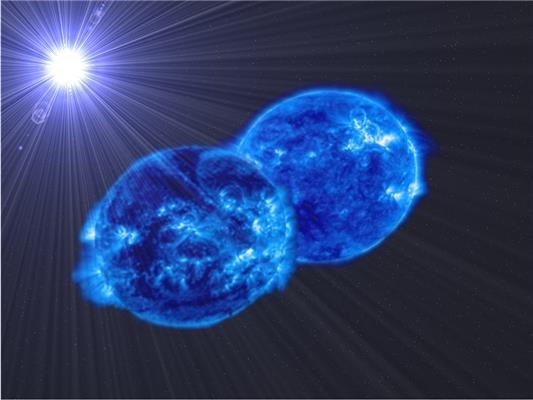 Scientists are reporting the discovery of a pair of huge stars that are circling each other and are starting to merge.

Theoretical models predict that the biggest stars form by merging with other smaller stars, according to the researchers. These stars initially make up “binary” or “multiple” systems, in which two or more stars move around each other about a common central point.

The new study examines what scientists call the largest known system of binary stars that are expected to merge and that are still “main sequence” stars, meaning they're in their active, fuel-burning phase.

The binary, known as MY Camelopardalis is also “eclipsing,” meaning that the stars sometimes block each other along the line of sight from Earth, say the researchers, who published their findings in the journal Astronomy & Astrophysics.

The scientists, who received help from amateur sky-watchers, also say the two stars are already touching, weigh the equivalent of 38 and 32 Suns, respectively, and take just 1.2 Earth days to circle each other. The stars are also believed to be slightly egg-shaped, as each distorts the other through its gravitational pull.

The stars-classified as “type O,” meaning the brightest, hottest, heaviest and bluest type-are also quite young and were already almost touching when they first formed, according to the group. And they're expected to merge before they themselves change much further.

Stars which, like the Sun, move alone in their galaxy are a minority, said the researchers, from the University of Alicante in Spain and other institutions. Most stars spend their lives tied by gravity to one or more companion stars. MY Camelopardalis, in the constellation of the Giraffe, is the brightest star in a cluster known as Alicante 1. Researchers at the university have identified the group as a small stellar nursery, or star-forming region.

MY Camelopardalis was known for over half a century as just a single, huge star, but only a decade ago recognized as an eclipsing binary. The eclipsing property, in which one star blocks our view of the other, allows astronomers to study the system in detail as the light coming from the system changes in a regular way.

The astrophysicists studied this light using an instrument known as a spectrograph at the Calar Alto Observatory in Spain. Amateur astronomers helped by measuring the changes in the amount of light coming from the system.

Among other things, the researchers concluded that the points on the surfaces of the stars are moving at over a 10,000 miles (16,000 kilometers) a second; that the material in their outer layers is mixing; and that the stars are less than two million years old, so they haven't had time to evolve since their birth.

While they're expected to merge, it's unclear exactly how this will play out. Some theoretical models suggest that the merger process is extremely fast, releasing a huge amount of energy in a kind of explosion. Other studies favor a less violent but still spectacular process.