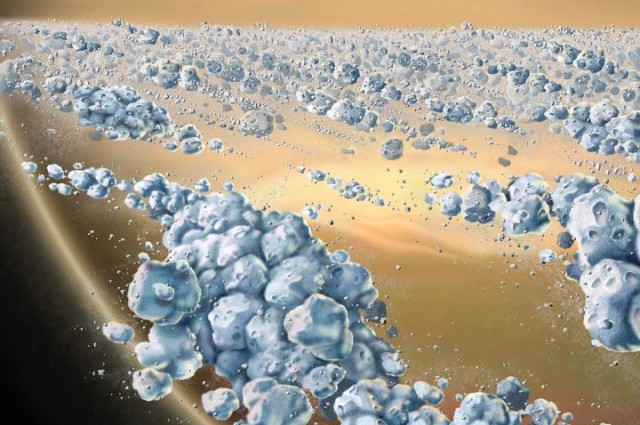 The particles making up rings around planets follow a “beautiful” law of size distribution that is the same for every ringed planet, according to the researchers behind a new study.

The investigators say they have has solved an age-old scientific riddle. Published in the journal Proceedings of the National Academy of Sciences, the study also suggests Saturn's rings are basically in a steady state that doesn't depend on their history.

“Saturn's rings are relatively well studied and it is known that they consist of ice particles ranging in size from centimeters to about ten meters” or yards, said Nikolai Brilliantov from the mathematics department at the University of Leicester, U.K., one of the authors.

The particles are probably “remains of some catastrophic event in a far past, and it is not surprising that there exists debris of all sizes,” he added. “What is surprising is that the relative abundance of particles of different sizes follows, with a high accuracy, a beautiful mathematical law ‘of inverse cubes.'”

“This holds true up to the size of about 10 meters, then follows an abrupt drop in the abundance of particles,” he went on. “The reason for this drastic drop, as well as the nature of the amazing inverse-cubes law, has remained a riddle until now.

“We have finally resolved the riddle,” he added. “In particular, our study shows that the observed distribution is not peculiar for Saturn's rings, but has a universal character”-all planetary rings are expected to follow it.

Most of the planets in the Solar System have satellites orbiting them. Some of them, such as Saturn, Jupiter, Uranus and Neptune, also have rings-a collection of still smaller, orbiting bodies of different sizes.

Planetary rings are also expected to exist beyond the Solar System. Moreover, large asteroids such as Chariklo and Chiron, though far smaller than planets, also sport rings.

“The rather general mathematical model elaborated in the study with the focus on Saturn's rings may be successfully applied to other systems, where particles merge, colliding with slow velocities and break into small pieces colliding with large impact speeds,” Brilliantov said. “Such systems exist in nature and industry” and follow the inverse-cubes law as well, he added.