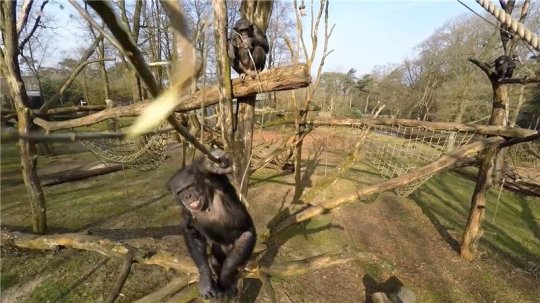 Cool. Calm. And oh, so calculated. That's how a chimp at a Dutch zoo, using a long stick, swatted down an aerial drone that was filming her group, scientists say.

In an article in the journal Primates, researchers Jan van Hooff and Bas Lukkenaar explain it as yet another example of chimpanzees' make-do attitude to using whatever is on hand as tools.

The incident happened on April 10, when a Dutch television crew was filming at the Royal Burgers' Zoo in Arnhem, the Netherlands.

The idea was to use a drone to film the chimps in their compound from different close-up angles.

The drone caught the apes' attention during a practice run, the researchers said. Some grabbed willow twigs off the ground, while four animals took these along when they climbed up scaffolding where the drone was hovering. This behavior isn't often seen among these chimps.

Filming started when the next drone flew over. It zoomed in on two chimpanzees, the females Tushi and Raimee. They were still seated on the scaffolding holding on to twigs that were about 180 cm (about six feet) long.

Tushi made two long sweeps with hers, and the second took down the drone and ultimately broke it, the scientists said. Before and during the strike, she grimaced. Although her face was tense and her teeth were bared, she showed no signs of fear, they added, suggesting she struck deliberately, not reflexively.

“The use of the stick as a weapon in this context was a unique action,” said van Hooff. “It seemed deliberate, given the decision to collect it and carry it to a place where the drone might be attacked.”

“This episode adds to the indications that chimpanzees engage in forward planning of tool-use acts,” Lukkenaar said. The incident also showed the apes cautiously inspecting the contraption and even throwing it around before they lose interest in it.

According to van Hooff and Lukkenaar, the chimpanzees at the zoo have never explicitly been taught tool use, but have had ample chance to watch humans handle all kinds of implements.

Previous studies showed that the chimps at this Dutch zoo spontaneously and innovatively use up to 13 types of tools in a variety of ways, especially utilizing sticks of different sizes. The apes seem to choose the size, shape and weight of the tools with a particular use in mind, according to the researchers. Sticks are, for instance, used to gather fresh leaves from overhead branches, while heavy pieces of wood and stones are chosen as throwing weapons.