Chimpanzees kill each other to eliminate rivals 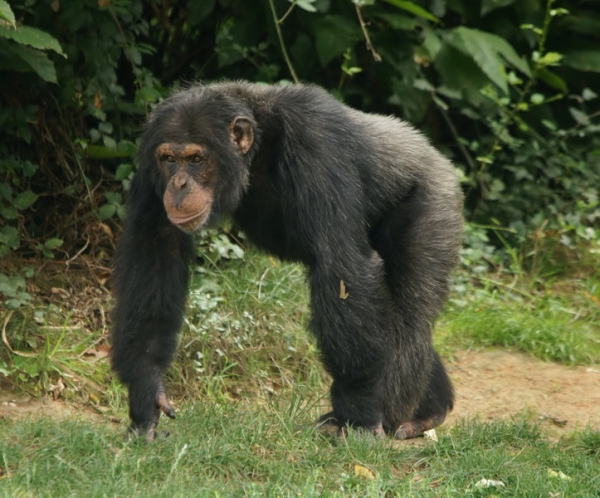 Why do chimpanzees sometimes kill each other? Although some scientists have argued that it's due to disturbances caused by us humans, a new study concludes it's not our fault-it's just their way.

In other words, the study says, we can blame evolution.

In the 1970s, reports of chimpanzee violence from the anthropologist Jane Goodall drew global attention. Since then, many have compared chimp-on-chimp violence to primitive warfare. This view holds that their aggression is an evolutionary strategy: they do it because for at least some chimps of the past, it paid off, whether through access to mates, food, territory or otherwise.

But others have argued that lethal chimp aggression is the consequence of human activities such as artificial feeding or habitat destruction.

The study looked at patterns of aggression among chimps and among their close relatives, bonobos, both of which are also close evolutionary relatives of humans. In fact, the debate over whether chimps are violent by nature has influenced the controversy over whether we ourselves are that way. What complicates this already difficult question is that bonobos are relatively peaceable.

The new study "debunks the idea that lethal aggression among wild chimpanzees is an aberrant behavior caused by human disturbances," said Arizona State University anthropologist Ian Gilby. Gilby is codirector of the long-term Gombe chimpanzee database for the Jane Goodall Institute Research Center and a co-author of the new findings, published in the journal Nature on Sept. 18.

The project compiled data gathered over half a century from 18 chimp and four bonobo communities. After analyzing 152 lethal attacks, the researchers concluded that chimps kill each other regardless of the level of human influence in their environment. Bonobos, on the other hand, weren't seen to kill each other at all.

Joan Silk, a scientist at the university who studies primate behavioral ecology, evolution and sociality, wrote a commentary on the study for the same issue of Nature. In the article, she discusses how the chimp debate bears on controversy about the origins and prevalence of human warfare. She argues that people often distort the image of chimps to make them seem nicer than they are: we attribute their morally appealing traits, such as cooperation, to evolution, while blaming their less savory traits on artificial factors.

Some scientists who argued that chimps were naturally violent have faced a backlash-as if they were suggesting that humans are the same way, a perhaps more disturbing idea. What the study suggests, Silk wrote, is simply that for chimps, that "there are some circumstances in which the benefits of lethal aggression exceed the costs… nothing more.” It doesn't mean people are fated to be warlike, she added.