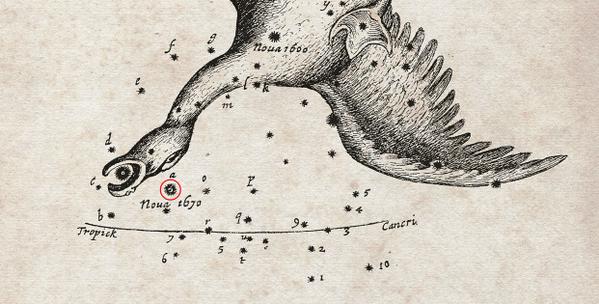 A “star” that European astronomers saw appear out of the blue in 1670 was actually a rare, violent breed of stellar collision, a new study proposes.

The burst was spectacular enough to be easily seen with the naked eye initially, but the traces it left were so faint that it took careful analysis with so-called submillimeter telescopes to unravel the mystery centuries later, astronomers claim.

The findings appear online in the journal Nature on March 23.

Some of seventeenth century's greatest astronomers, including Hevelius, the father of lunar mapmaking, and Cassini, who discovered four of Saturn's moons, carefully documented the appearance of a “new star” in 1670. Hevelius described it as “nova sub capite Cygni”-a “new star below the head of the Swan.” Astronomers now know it as “Nova Vulpeculae 1670.”

Nova Vul 1670 was later said to be both the oldest recorded nova-a particular type of stellar outburst-and the one that left the faintest traces for later study.

“For many years this object was thought to be a nova, but the more it was studied the less it looked like an ordinary nova-or indeed any other kind of exploding star,” said the study's lead author, Tomasz Kaminski.

After its first appearance, Nova Vul 1670 varied in brightness over two years, then vanished and reappeared twice before twinkling out for good.

In the last century, astronomers learned that most novae occur when a particular type of star pulls away material from a companion star, leading the material to eventually explode. But Nova Vul 1670 didn't fit this picture and remained a mystery.

Even with ever-increasing telescopic power, the event was believed for a long time to have left no trace. Only in the 1980s did astronomers detected a faint cloud where the remains should be. The new study probed that area by investigating light waves of a particular “wavelength”-the length of light waves determine their energy and color. This revealed a “very unusual chemical composition” in the gas, said Kaminski, of the European Southern Observatory and of the Max Planck Institute for Radio Astronomy in Bonn, Germany.

“We have now probed the area with submillimeter and radio wavelengths. We have found that the surroundings of the remnant are bathed in a cool gas rich in molecules,” he explained.

The astronomers used telescopes including the European Southern Observatory's Atacama Pathfinder Experiment telescope in Chile to analyze the chemical makeup and measure the ratios of different isotopes, or variants of particular elements, in the gas. The investigators concluded that there was too much of the cool material to attribute it to a nova, and the isotope ratios were also wrong. But if it wasn't a nova, then what was it?

The answer is a spectacular collision between two stars-more brilliant than a nova, but less so than a so-called “supernova,” they argue. This collision produces something called a red transient, a very rare event in which stars explode due to a merger with another star. They spew material from the stellar interiors into space, eventually leaving behind only a faint remnant embedded in a cool environment, rich in molecules and dust.

“This kind of discovery is the most fun: something that is completely un expected!” said co-author Karl Menten of the Max Planck Institute.