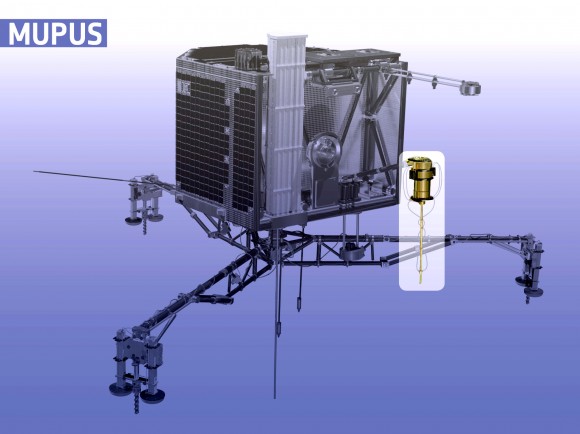 A lander that spent two days on a comet before losing power has sent data suggesting the surface beneath was of dusty ice, mission scientists said Tuesday.

An investigator for the European Space Agency mission, called Rosetta, also told British media that the lander had detected organic molecules, but did not say which ones.

Some preliminary findings come from an instrument package called Mupus, for Multi-Purpose Sensors for Surface and Subsurface Science, aboard the Philae lander. Mupus is designed to test out the temperature, compactness and hardness of the surface.

These temperatures are similar to what a thermometer would record on the shaded side of the International Space Station above Earth, although the comet is currently about three times further from the Sun than that.

The coldest temperature theoretically possible, called absolute zero, is only around one or two hundred degrees lower (for Celsius or Fahrenheit, respectively).

After taking the initial reading, Mupus sensors cooled by about 10 degrees Celsius over about half an hour, possibly because the instrument radiated away heat or “the probe had been pushed into a cold dust pile,” said Jörg Knollenberg, instrument scientist for Mupus at Germany's DLR aerospace center.

The instrument then started to hammer itself into the ground but couldn't get further than a few millimeters, having hit “a hard surface with strength comparable to that of solid ice,” added Tilman Spohn, Mupus principal investigator.

At greater depths inside the comet, the ice likely is likely more porous, as instruments on Rosetta itself suggest the interior is not very compact, according to the Rosetta Blog.

Scientists originally hoped to get repeated measurements out of Mupus to observe any changes as the comet circled around the Sun. As it turned out, they said, the Philae lander lost power on Nov. 15 because-after two unintended bounces off an initial landing spot-it wound up in a place in too poorly lit for the solar panels to recharge a secondary battery. Scientists still have no more than a rough idea of the lander's location on the comet, called 67P/Churyumov-Gerasimenko.

“Mupus could be used again if we get enough power” as the comet approaches the sun, when scientists hope to reawaken the lander, Spohn said.

Separately, a scientist working with the lander's Cosac instrument (COmetary SAmpling and Composition) told the BBC News on Tuesday that its sensors had detected organic molecules in the gases surrounding the comet. However, the scientist, instrument Principal Investigator Fred Goessmann, did not offer details pending further study. NASA's Deep Impact comet mission in 2005 also detected a variety of organic molecules after it sent a probe, Deep Impact, to hit comet Tempel 1.

Since organic, or carbon-containing, molecules are the basis of life, some theories hold that comets have been one way that life spreads throughout the universe.