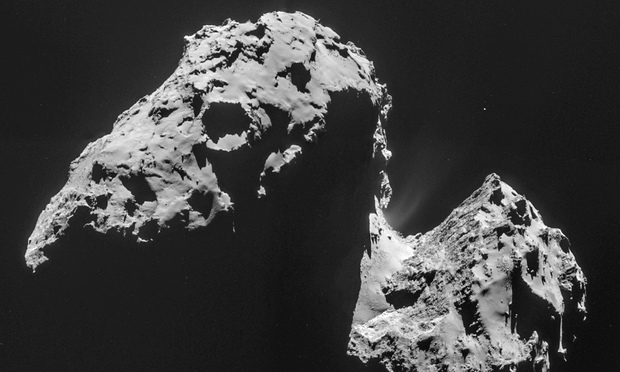 A comet studied close-up by the European Space Agency is yielding surprising secrets about its water, scientists say.

The new data from the agency's Rosetta spacecraft suggest most of Earth's water came from asteroids, not comets, and that comets closer to our part of the Solar System have more diverse origins than previously suspected.

Rosetta found the water vapor from Comet 67P/Churyumov–Gerasimenko to be very unlike Earth's, in measurements made in the month following the spacecraft's arrival at the comet on Aug. 6.

One of the leading hypotheses on Earth's formation is that it was so hot when it formed 4.6 billion years ago that any original water content should have boiled off. But, today, two thirds of the surface is water, so where did that come from?

Scientists think the water came later from impacting asteroids and comets-two different types of objects that orbit the Sun. (They have different makeups and asteroids lack tails, for instance.)

But how much water came from each type of object is debated.

Scientists believe a key to determining where a particular body of water originated is the levels, within it, of a type of hydrogen known as deuterium, as compared to normal hydrogen. Simulations show that during the first few million years of the Solar System, deuterium levels should change with distance from the Sun and with time. Therefore deuterium levels in a particular body of water can reveal something about where and when it originated.

Comets in particular are considered unique tools to study these origins, since they harbor material directly left over from the dust cloud that gave rise to the planets.

But this isn't straightforward because many comet orbits have gotten mixed up since long ago. “Long-period” comets, a type that is more distant from the sun, are thought to have originally formed closer in, in the area of the planets Uranus and Neptune. And “short-period” comets, which now inhabit inner regions-like Rosetta's-were thought to have formed further out, in the Kuiper Belt beyond Neptune.

Previous measurements of other comets' deuterium levels have varied widely, researchers say. Of the 11 comets for which there are measurements, only the short-period Comet 103P/Hartley 2 was found to match Earth water in makeup, in observations made by the European Space Agency's Herschel mission in 2011. The levels now measured by Rosetta are more than three times greater.

“This surprising finding could indicate a diverse origin for the Jupiter-family comets – perhaps they formed over a wider range of distances in the young Solar System than we previously thought,” said Kathrin Altwegg, lead author of the paper reporting the results in the journal Science this week.

Second, she said, “our finding… adds weight to models that place more emphasis on asteroids [than comets] as the main delivery mechanism for Earth's oceans.” Altwegg is principal investigator for an instrument called Rosina (Orbiter Spectrometer for Ion and Neutral Analysis) on the spacecraft, which made the measurements.

“As Rosetta continues to follow the comet on its orbit around the Sun throughout next year, we'll be keeping a close watch on how it evolves and behaves,” added Matt Taylor, the space agency's Rosetta project scientist.