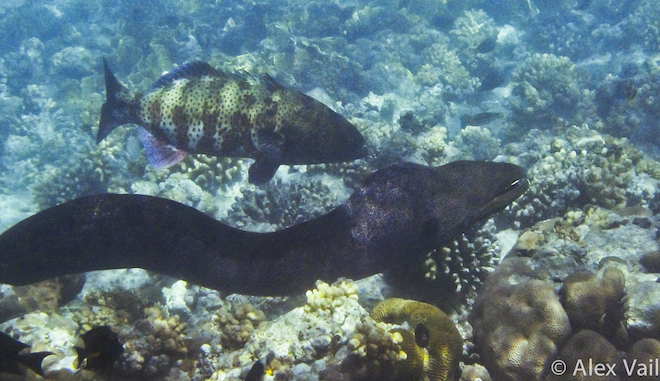 Coral trout and moray eel collaborate with deadly effectiveness in hunting. Now, researchers have studied their technique and concluded that the trout's collaborative skills rival those of the much bigger-brained chimp, our closest evolutionary relative.

The trout, they say, join the chimps as one of the few non-human species known to choose the right situation and partner to succeed in a collaborative task, learning as it goes.

Coral trout can give quick chase in open water, but not if their prey escapes into a hard-to-reach coral reef crevice. In that case, the trout will team up with a snake-like moray eel to flush out the unfortunate victim. The trout signals the eel to slip into the reef after the target. The eel then either gets the prey or scares it back into the open so the trout can pounce.

The trout use gestures and signals to flag the prey's location to an eel, including headshakes and headstands that actually point the eel in the right direction, according to the study. The trout have a startling ability to assess when a situation needs a collaborator and to pick the right partner nearby, the scientists say. A close relative of the coral trout, the roving coral grouper, shows similar behavior.

The researchers, at the University of Cambridge, compared these capacities of the trout with those of highly-intelligent chimpanzee using similar experiments, and found the fish perform as well if not better. The findings are published Sept. 8 in the journal Current Biology.

The researchers caught wild coral trout and recreated hunting scenarios in set-ups that mirrored their natural environment. The aim was to create experiments analogous to older studies with chimpanzees, called rope-pull experiments, but relevant to the trout's habitat.

In the 2006 rope-pull experiments, chimps were shown fruit placed on a plank out of reach. A rope was attached to the end of each plank, and two chimps would have to pull the rope at the same time to get the fruit. Similarly, the trout were presented with out-of-reach food in the form of prey in a crevice, and the possibility of a collaborator that took the shape of a fake moray eel as fashioned by the researchers.

The trout undertook the same number of trials as the chimps over a similar time frame. When conditions required collaboration, the trout were at least as good as chimps at determining when they needed to recruit a collaborator, doing so in 83 percent of cases, and learned more effectively than chimps when the collaborator was unnecessary, the study found.

When the trout were given a choice between two model moray eels-one a successful collaborator, and another that swam away instead of helping-the trout's ability to pick the successful partner was measured as identical to that of the chimps. Both species learned by the second day of the study to choose the right partner three times more often than the wrong one. For both trout and chimps, six subjects participated in six trials per day for two days.

A 2009 study also found that hyenas perform well at the rope-pull task, although the fish's collaboration across species may take things to a different level.

“Our results show that, like chimpanzees, trout can determine when a situation requires a collaborator and quickly learn to choose the most effective one,” said Cambridge researcher Alexander Vail, who led the study. “This study strengthens the case that a relatively small brain-compared to warm-blooded species-does not stop at least some fish species from possessing cognitive abilities that compare to or even surpass those of apes.”

“Perhaps the biggest question is whether the processes underlying collaborative partner choice in humans, chimpanzees and trout are the result of common ancestry or an evolutionary convergence,” added Vail. “Convergence-where species of different lineages evolve similar features-has been suggested as the reason for other superficially similar ape and human abilities, and is the most likely reason why trout would seem to share this one too.”