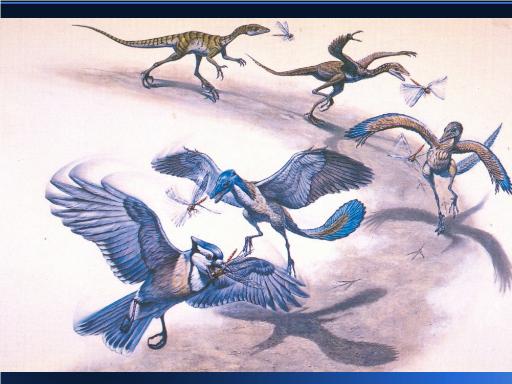 This adaptability also helped the bird forerunners survive the disaster that killed off the other dinosaurs, according to the study, in the latest issue of the journal Science.

The researchers present a detailed family tree of dinosaurs and their bird descendants mapping out this unlikely transformation. The tree indicates that the “theropod” dinosaurs, the branch that gave rise to birds, were the only dinosaurs that kept getting inexorably smaller.

“These bird ancestors also evolved new adaptations, such as feathers, wishbones and wings, four times faster than other dinosaurs,” said study co-author Darren Naish, vertebrate paleontologist at the University of Southampton in the U.K.

“Birds evolved through a unique phase of sustained miniaturization in dinosaurs,” added lead author Michael Lee of the University of Adelaide in Australia and the South Australian Museum. “Being smaller and lighter in the land of giants, with rapidly evolving anatomical adaptations, provided these bird ancestors with new ecological opportunities, such as the ability to climb trees, glide and fly. Ultimately, this evolutionary flexibility helped birds survive the deadly meteorite impact which killed off all their dinosaurian cousins.”

“The dinosaurs most closely related to birds are all small, and many of them-such as the aptly named Microraptor-had some ability to climb and glide,” said Gareth Dyke of Southampton.

The study examined over 1,500 anatomical traits of dinosaurs to reconstruct their family tree. The researchers used mathematical modeling to trace evolving adaptations and changing body size over time and across dinosaur branches. “Birds out-shrank and out-evolved their dinosaurian ancestors, surviving where their larger, less evolvable relatives could not,” said Lee.