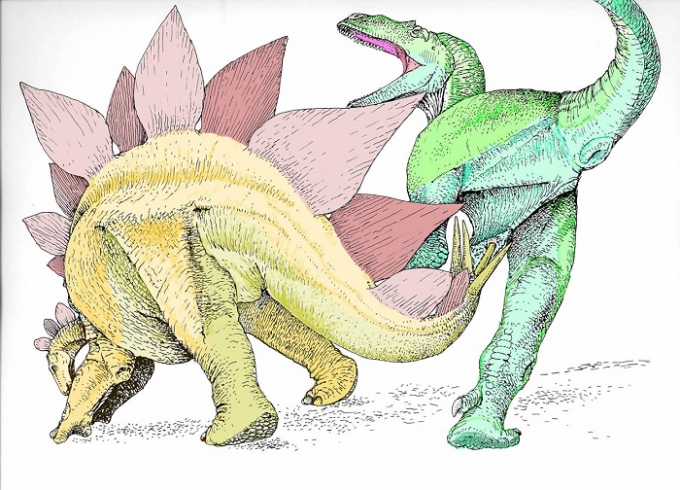 Loaded with bony plates down their backs, stegosaurs, one of the most widely-known dinosaurs, are sometimes portrayed as lumbering plant eaters.

But they were lethal fighters when necessary, say scientists who are reporting new evidence of a deadly stab wound inflicted by one of them.

The wound – in a predatory dinosaur's pubis bone, and in the conical shape of a stegosaur tail spike – would have required great dexterity to inflict, according to the scientists.

It also, they said, shows clear signs of having cut short the allosaur's life.

“A massive infection ate away a baseball-sized sector of the bone” in the predator, called an allosaur, said Houston Museum of Natural Science paleontologist Robert Bakker. Bakker and colleagues presented their findings on Tuesday at the meeting of the Geological Society of America in Vancouver, B.C.

“Probably this infection spread upwards into the soft tissue attached here, the thigh muscles and adjacent intestines and reproductive organs.” The lack of any signs of healing strongly suggests the infection led to death, he added.

Similar wounds are seen in rodeo cowboys or horses when they are gored by longhorns, Bakker said. And since large plant-eaters – like longhorn cattle, rhinos and buffalo – today defend themselves with horns, it's reasonable to assume spiky herbivorous dinos did the same.

A big difference is that stegosaurs wielded their weapon on their tails rather than their heads, he said. Skeletal evidence from fossil stegosaurs suggests their tails were more dexterous than most dinosaur tails.

“Most dinosaur tails get stiffer towards the end,” he explained. But stegosaurs had massive muscles at the base of the tails, flexibility and fine muscle control all the way to the tip. “The joints of a stegosaur tail look like a monkey's tail. They were built for three-dimensional combat.”

In order to deliver the mortal wound to the allosaur, he said, a stegosaur would have had to sweep its tail under the allosaur and twist the tail tip, because normally the spikes point outward and backward. That would have been well within a stegosaur's ability, Bakker said.

Stegosaurs' fighting style and skill should come as no surprise to anyone familiar with the dinosaur battle scene in the 1940 Disney animated film Fantasia, said Bakker. The scene shows a beefed up allosaur attacking a stegosaur. The stegosaur delivers a number of well-aimed tail blows at the predator, but loses the fight. The Fantasia stegosaur tail dexterity seems to be accurate, he said. But he questions the stegosaur's loss in the end-“I think the stegosaur threw the fight.” On the other hand, he notes stegosaurs had among the smallest brains for its body size of any large animal, ever.