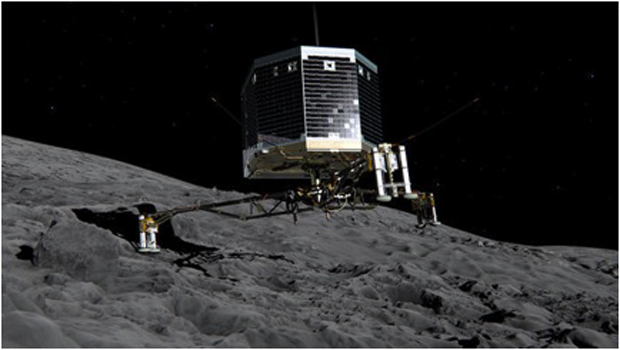 The European Space Agency's Rosetta mission has softly landed a probe upon a comet, the first time in history such a feat has been achieved, project scientists said Wednesday.

After a tense wait amid a seven-hour drop, a signal confirming the touchdown on Comet 67P/Churyumov-Gerasimenko hit Earth at 5:03 p.m. Central European time.

The mission was “the first to rendezvous with and orbit a comet,” and is now also “the first to deliver a lander to a comet's surface,” said agency Director General Jean-Jacques Dordain.

“We are opening a door to the origin of planet Earth and fostering a better understanding of our future.”

“After more than 10 years traveling through space, we're now making the best ever scientific analysis of one of the oldest remnants of our Solar System,” added Alvaro Giménez, ESA's Director of Science and Robotic Exploration.

The landing occurred despite a problem that was detected with one of the thrusters during a final “health check” of the lander, officials said. It remained unclear whether the thruster actually performed, and researchers said they're investigating this.

“We are extremely relieved to be safely on the surface,” said Stephan Ulamec, Philae Lander Manager at DLR, Germany's national aeronautics and space research center. “In the next hours we'll learn exactly where and how we've landed, and we'll start getting as much science as we can.”

Rosetta traveled 6.4 billion kilometers (4 billion miles) through the Solar System before arriving in the comet's vicinity on Aug. 6. The landing site, named Agilkia and located on the head of the bizarre dumbbell-shaped object, was picked six weeks later based on close-up images and data. These revealed the comet as a world littered with boulders, towering cliffs and daunting precipices and pits, with jets of gas and dust streaming out.

Following a period spent at 10 km (6 miles) for further close-up study of the landing site, Rosetta moved onto a more distant trajectory to prepare for deployment. Five critical go/no-go decisions were made last night and early this morning, scientists said, confirming different stages of readiness ahead of separation, along with a final pre-separation maneuver by the orbiter.

During the seven-hour descent, made without propulsion or guidance, Philae took images and recorded information.

“One of the greatest uncertainties… was the position of Rosetta at the time of deployment, which was influenced by the activity of the comet at that specific moment, and which in turn could also have affected the lander's descent trajectory,” said Sylvain Lodiot, ESA Rosetta Spacecraft Operations Manager. “Furthermore, we're performing these operations in an environment that we've only just started learning about, 510 million km (320 million miles) from Earth.”

Touchdown was planned to take place at around 1 meter (yard) per second, with the three-legged landing gear absorbing the impact to prevent rebound, and an ice screw in each foot driving into the surface.

Over the next 2˝ days, the lander is to conduct its main science mission, assuming its main battery remains healthy. An extended science phase using the rechargeable secondary battery may be possible through about March, scientists said, barring problems with lighting and dust.

Highlights from the primary phase are to include a full panoramic view of the landing site, including a section in 3D, high-resolution images of the surface right underneath the lander, on-the-spot analysis of the makeup of comet surface materials, and a drill that will take samples for analysis by an onboard laboratory.

“Rosetta is trying to answer the very big questions about the history of our Solar System. What were the conditions like at its infancy and how did it evolve? What role did comets play in this evolution? How do comets work?” said Matt Taylor, ESA Rosetta project scientist.