Extreme storms flare up on Uranus for first time ever 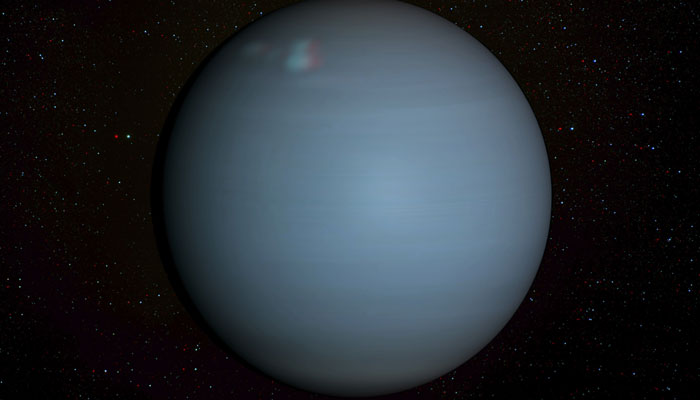 Storms are churning up the normally bland blue-green face of Uranus-creating huge cloud systems visible for the first time in even amateur astronomers' telescopes.

“The weather on Uranus is incredibly active,” said Imke de Pater, professor and chair of astronomy at the University of California, Berkeley, and leader of the team that first noticed the events using the W. M. Keck II Telescope in Hawaii.

“Why we see these incredible storms now is beyond anybody's guess,” added co-investigator Heidi Hammel of the Association of Universities for Research in Astronomy.

“This type of activity would have been expected in 2007, when Uranus's once every 42-year equinox occurred,” she said. An equinox is when a planet's day and night are of equal length, and the sun shines directly on the equator.

“But we predicted that such activity would have died down by now,” she added.

De Pater, Hammel and their team detected eight large storms on Uranus's northern hemisphere when watching the planet with the Keck Telescope on August 5 and 6. One was the brightest storm ever seen on Uranus in a color of infrared light associated with a particular level of atmosphere.

When amateur astronomers heard about the activity, they turned their telescopes on the planet and were amazed to see a bright blotch on the surface of a normally boring blue dot.

French amateur astronomer Marc Delcroix processed the amateur images and confirmed the discovery of a bright spot on an image by French amateur Rťgis De-Bťnedictis, then in others taken by fellow amateurs in September and October. He had his own chance on Oct. 3 and 4 to photograph it with the Pic du Midi one-meter telescope in the French Pyrenees, where on the second night, “I caught the feature when it was transiting, and I thought, ĎYes, I got it!'” said Delcroix.

“I was thrilled,” he added. “Getting details on Mars, Jupiter or Saturn is now routine, but seeing details on Uranus and Neptune are the new frontiers for us amateurs and I did not want to miss that.” Delcroix works for an auto parts supplier in Toulouse and has been watching the skies, especially Jupiter, with his backyard telescope since 2006 and, since 2012, sometimes with the Pic du Midi telescope.

The extremely bright storm seen by Keck in near-infrared light isn't the one seen by the amateurs, which is much deeper in the atmosphere than the one that initially caused the excitement. Astronomers concluded it came from below an uppermost cloud layer of methane-ice in Uranus's atmosphere.

“The colors and morphology [shape] of this cloud complex suggests that the storm may be tied to a vortex in the deeper atmosphere similar to two large cloud complexes seen during the equinox,” Sromovsky said. Such vortices could be anchored much deeper in the atmosphere, he added, and extend over large vertical distances, as inferred from similar vortices on Jupiter, including its Great Red Spot.

Astronomers also used the Hubble Space Telescope to image the planet on Oct. 14. Observing at a variety of wavelengths or colors, this revealed multiple storm components extending over a distance of more than 9,000 kilometers (5,760 miles) and clouds at a variety of altitudes.

De Pater, Sromovsky, Hammel and Pat Fry of the University of Wisconsin are to report the details on Nov. 12 at a meeting of the American Astronomical Society's Division for Planetary Sciences in Tucson, Ariz.