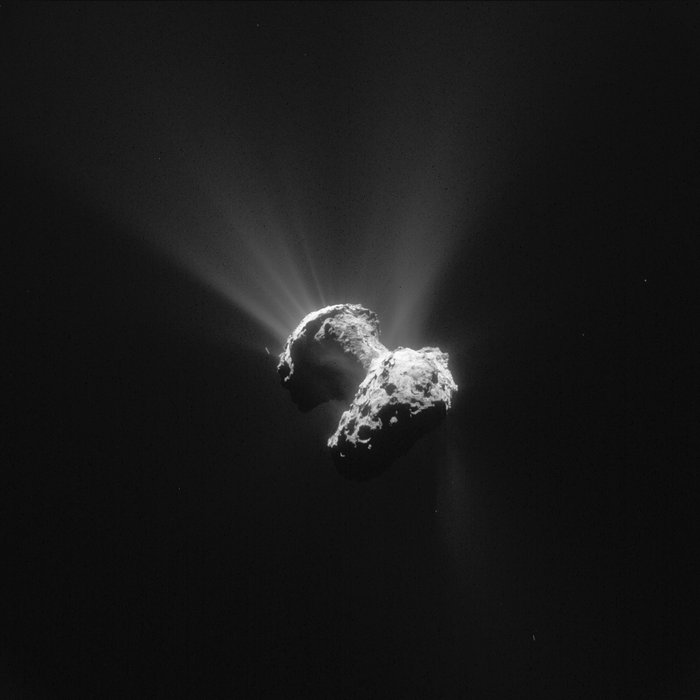 A daily cycle in which water ice turns to gas feeds the “tails” and fuzzy halos of comets like the one under scrutiny by the European Space Agency's Rosetta spacecraft, mission scientists say.

Comets are mixtures of dust and ices, which they periodically shed as they swing towards their closest point to the Sun along their stretched-out, elliptical orbits.

As sunlight heats the frozen nucleus, or core, of a comet, its ice – mainly water but also other “volatile” compounds such as carbon monoxide and carbon dioxide – turns directly to gas, scientists say.

This gas flows away from the comet, carrying dust particles along and building up the characteristic bright tail and halo.

Rosetta reached Comet 67P/Churyumov–Gerasimenko in August 2014 and has been studying it up close for over a year. On Aug. 13, 2015, the comet reached the closest point to the Sun along its 6.5-year orbit, and is now returning towards the outer Solar System.

Rosetta's scientists are investigating how activity on the comet and the associated “outgassing” work.

Using a Rosetta instrument called the Visible, InfraRed and Thermal Imaging Spectrometer (VIRTIS), they identified an area on the comet's surface where water ice appears and disappears in sync with its spinning. Their findings are published Sept. 23 in the research journal Nature.

“We found a mechanism that replenishes the surface of the comet with fresh ice at every rotation; this keeps the comet ‘alive,'” said Maria Cristina De Sanctis of the Institute for Space Physics and Planetology of the National Institute for Astrophysics in Rome, lead author of the study.

The team studied data gathered last September, focusing on a one-square-kilometer zone on the comet's “neck” area. At the time, the comet was about 500 million km (300 million miles) from the Sun and the neck was one of the most active areas.

As the comet spins, taking just over 12 hours to turn around once completely, the various regions receive different lighting.

“We saw the tell-tale signature of water ice in the spectra [color make-up] of the study region but only when certain portions were cast in shadow,” said de Sanctis. “When the Sun was shining on these regions, the ice was gone.”

This suggests that water ice on and a few centimeters below the surface turns to gas when lit up, then flows away, she explained.

Then, as darkness returns, the surface quickly gets cold again. But the deeper ice stays warm for a while, so it can keep turning to gas and finding its way outward through the porous material. This gas doesn't drift away immediately; upon reaching the cold surface it freezes again, creating a layer of fresh ice that's the first to turn to gas after sunlight returns. Thus the cycle restarts, according to the scientists.

“We suspected such a water ice cycle might be at play at comets,” said Fabrizio Capaccioni, principal investigator with the instrument at the institute, but now “we finally have observational proof.”

Down to a few centimeters deep over the area surveyed, water ice accounts for 10-15 percent of the material and seems well mixed in, the scientists said.