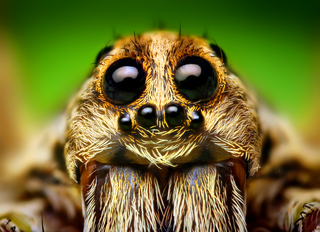 Creatures living high in the rainforest trees sometimes fall off the branches, perhaps as they're trying to escape a predator.

But dropping down 30 meters (yards) or more can be dangerous. Not least is the risk of dropping onto unfamiliar ground where a new array of predators lurks.

Scientists already know that some ants can control a fall from such heights, gliding towards a safe landing site. It now turns out that a special, flat-bodied spider can do impressive maneuvers of a similar type, a study reports.

“These spiders represent a remarkable evolutionary adventure in the animal conquest of the air,” members of the research team wrote. They add that the spiders are “unlikely if not truly ungainly” aerial acrobats but that their skill could inspire robotic design.

The researchers set about finding out if spiders of the genus Selenops, nicknamed “flatties,” might be able to glide to safety.

The method was simple: the scientists dropped the spiders from treetops. The spiders righted themselves mid-air to swoop head first towards the safety of a tree trunk, the study found.

The flat bodies may contribute to the excellent gliding ability, the investigators said.

In the drop tests 93 percent of the spiders landed successfully on a tree trunk. The rest landed on the forest floor. The team tested spiders from other species and found they weren't such graceful gliders. Some managed to right themselves in free-fall but didn't show any obvious control over the direction of their descent.

The team filmed the drop tests in slow motion and analyzed the spiders' body shapes as they fell. With most of their legs spread behind them, the flatties go head first with their two front legs raised. The scientists noted that the spiders steered themselves using these front legs.

The study was published Aug. 19 in the Journal of the Royal Society Interface.