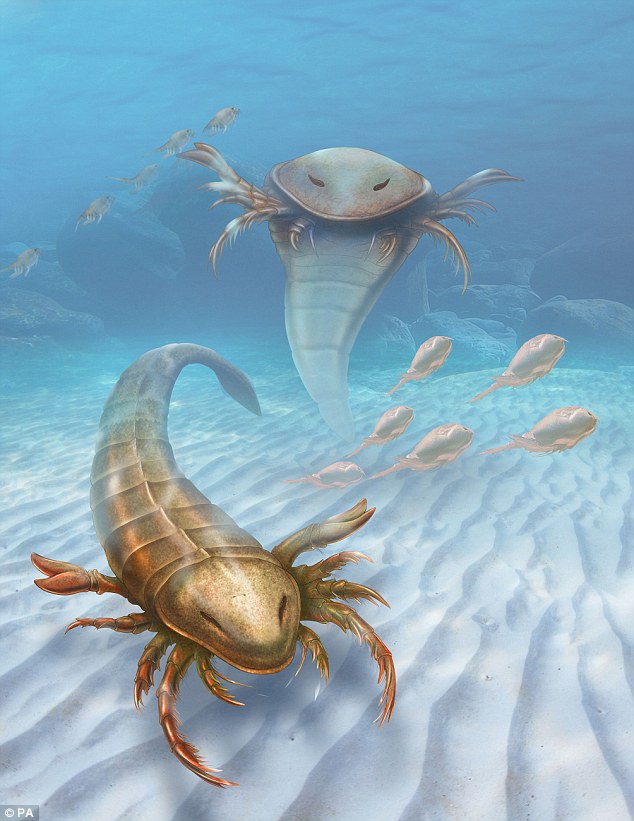 Fossils of a previously unknown species of giant sea scorpion, measuring over 1.5 meters (5 feet) long, have turned up in Iowa, researchers report.

The animal's length roughly matches that of another ancient sea scorpion reported in 2005, but the newfound fossil is estimated as about a 130 million years older, making it the oldest known species of sea scorpion. These monsters once prowled the seas and are part of the order arachnids, an evolutionary group that includes both scorpions and spiders.

The findings are described in the research journal BMC Evolutionary Biology.

The authors named the new species Pentecopterus decorahens after the “penteconter”-an ancient Greek warship that the beast resembles in outline and parallels in its predatory behavior.

The animal is “incredibly bizarre. The shape of the paddle-the leg which it would use to swim-is unique, as is the shape of the head,” said lead author James Lamsdell of Yale University.

“Perhaps most surprising is the fantastic way it is preserved,” he added.

The hard outer covering, or exoskeleton, “is compressed on the rock but can be peeled off and studied under a microscope. This shows an amazing amount of detail, such as the patterns of small hairs on the legs. At times it seems like you are studying the shed skin of a modern animal.”

The species is represented by more than 150 fossil fragments, he said dug out from the upper layer of the Winneshiek Shale in northeastern Iowa-a 27-meter thick sandy shale located within an ancient meteorite impact crater and mostly submerged by the Upper Iowa River.

Some large body segments suggest a total length of up to 1.7 meters, making Pentecopterus the largest known eurypterid from its era, he added. The beast is estimated as 460 million years old, making it ten million years older than the previous oldest record of the eurypterid group.

The age would put it within the so-called Ordovician Period, which also saw the first evidence of plants and animals colonizing land.

Some features of Pentecopterus hint at the functions of certain body parts, the authors said. The rearmost limbs include a paddle with a large area, and joints that seem to be locked in place to reduce flex, suggesting they were used to swim or dig.

The exoskeleton's great preservation also helped the researchers to interpret the role of finer structures, including scales, follicles and stiff bristles called setae that covered the rearmost limbs. The setae form arrangements similar to those in swimming crabs, where they function to expand the surface area of the paddle during swimming. But the smaller follicle size in sea scorpions, also called eurypterids, suggests that the setae could have had a sensory function, the authors said.

Some limbs also have spines described as similar to those found on horseshoe crabs, where they aid in processing food.