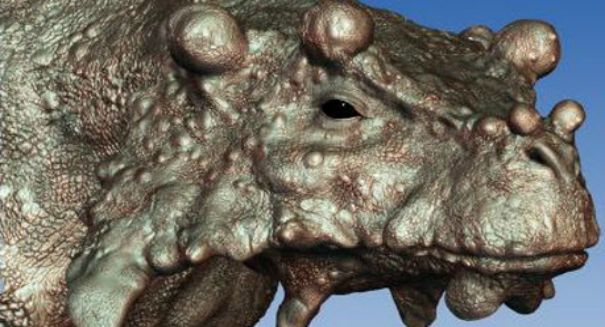 A cowsized animal described as a prereptile may have been the earliest known creature to walk on all fours, according to scientists.

A newly published analysis dates the bones of the animal, Bunostegos akokanensis, to 260 million years ago-around 10 million years before the age of the dinosaurs.

“Imagine a cowsized, planteating reptile with a knobby skull and bony armor down its back,” said Linda Tsuji of the Royal Ontario Museum, who codiscovered the fossils in Niger in 2003 and 2006.

A report on the findings by Tsuji and others describes Bunostegos as a pareiasaur, one of a group of animals that roved Pangea-a land consisting of almost all the land masses of Earth crammed into one “supercontinent.”

The known pareiasaurs, however, were “sprawlers” whose limbs would jut out from the side of the body and then continue out or slant down from the elbow, like some modern lizards, according to the researchers.

Morgan Turner, lead author of the report and currently a graduate student at Brown University in Rhode Island, said she expected the same of Bunostegos, but the bones tell a different story.

“A lot of the animals that lived around the time had a similar upright or semiupright hind limb posture,” she explained. But the forelimb of Bunostegos is “seemingly directed underneath its body… The elements and features within the forelimb bones won't allow a sprawling posture.”

Among other things, the shoulder joint faces down; the humerus, the bone running from shoulder to elbow, isn't twisted as it is in “sprawlers”; the elbow has limited range, blocking the forearm from swinging sideways; and the forearm bones are longer than the humerus, something common among nonsprawlers.

“Many other sprawling fourlegged animals have the reverse ratio,” she explained.

Bunostegos lived in a tough habitat somewhat apart from other pareiasaurs, she added, and the upright posture may have had something to do with this. Niger was a dry place then, with plants and water sources few and far between. Scientists have associated walking upright on all fours with more energy efficiency than sprawling. For the long journeys between meals, Turner said, the upright posture might have been crucial for survival.

Bunostegos seems to push back the clock on when the upright posture shows up in evolution, Turner said. But she added that she wouldn't be surprised if other animals of the time turn out to have similarities to this posture, which has evolved independently in reptiles and mammals several times.

“Posture, from sprawling to upright, is not black or white,” but comes in endless shades, Turner said. “There are many complexities about the evolution of posture and locomotion we are working to better understand every day.”