Lander in awkward spot on comet, but sends pictures 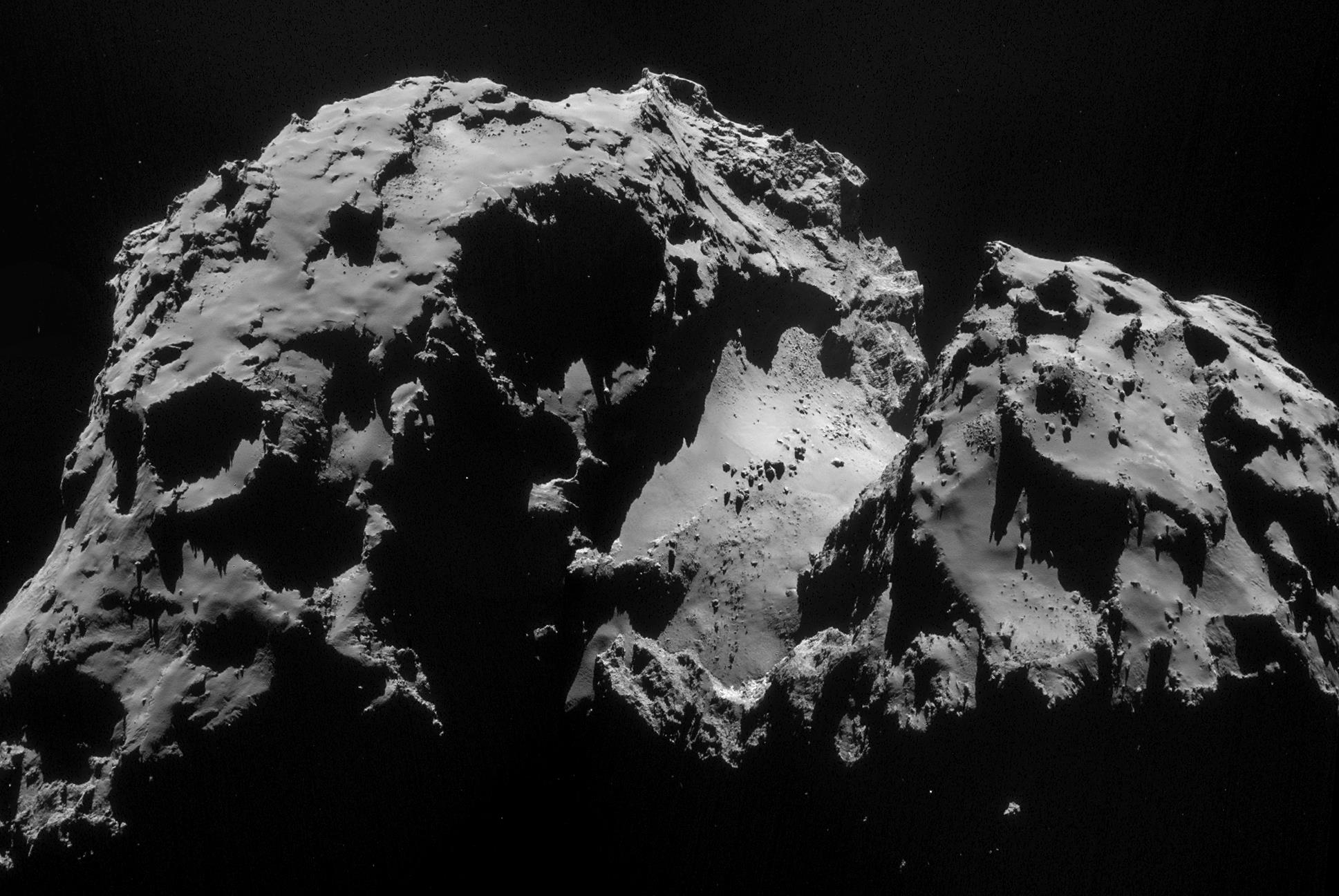 A probe sent to land on a comet yesterday is sitting askew in a dark spot on that object-not quite where it was aimed, and it's not exactly clear where, mission scientists said Thursday.

And that is creating some problems.

Nonetheless, the scientists said the European Space Agency's Philae lander is working, gathering data. Photos-the first ever taken upon a comet-showed what looked like dark, rocky surroundings. Scientists added that they're studying what to do next, and exactly where it is; they have a rough idea.

About the photos, “I cannot tell you much more than you can interpret yourself” for now, Stephan Ulamec, Philae project manager at DLR, Germany's national aeronautics and space research center, told journalists at a conference Thursday.

The problems arose after the lander bounced twice away from its planned impact spot due to a failure of harpoons that were supposed to tie it down.

“We still have the possibility to maneuver” the lander, and a priority is getting into a better-lit area, said Jean-Pierre Bibring, lead scientist for the probe, speaking at the conference in Darmstadt, Germany.

The probe is almost on its side, with one of its three feet sticking out into open space, he explained. A cliff seems to be nearby, perhaps a few meters or yards away. The lander's “somewhat bizarre orientation” might be explained by the possibility that it's on the rim of a large crater, Ulamec said.

The inside of that crater-on the head of the roughly 5-km (3-mile) long comet, 67P/Churyumov-Gerasimenko-happened to be among the alternative landing spots originally under consideration. Mission scientists eventually opted to instead target another site closer to the comet's tip.

Philae hit that spot correctly but then “made quite the leap,” ending up perhaps about a thousand meters or yards away, according to Ulamec.

Philae Operations Manager Koen Geurts, speaking from the Lander Control Center in Cologne, Germany, told the conference that about two hours passed from the first bounce to the final landing, based on signals that showed when the lander started and stopped moving.

Ulamec said scientists have a rough idea of its current location thanks to an instrument onboard known as Consert (Comet Nucleus Sounding Experiment), which probes the comet's internal structure with radio waves.

The lander is also not screwed into the comet surface, as was intended, although this may be fixable, scientists said. Just “the weight of the lander” is keeping it down on the comet, Ulamec noted. That's not much force: since a comet is much smaller than a planet, a person standing where Philae is would weigh around as much as a tic-tac. Philae's Earth-weight is 46 pounds (21 kg).

The lander is collecting perhaps a fourth as much sunlight as it would have in the planned landing spot, according to estimates provided by Geurts. The shortage of sunlight presents difficulties for the lander's solar panels though its main battery can go ahead.

Because of the lander's delicate position the mission needs to be careful about which instruments it will activate next, to avoid destabilizing the lander more, Ulamec said.

But he said mission scientists are somewhat inclined toward activating an instrument called Mupus (Multi-Purpose Sensor for Surface and Subsurface Science) which uses sensors to measure the hardness, density and other properties of the surface. Another possibility is to deploy APXS (Alpha Proton X-ray Spectrometer) which detects particles and X-rays near the ground to understand the surface makeup.