Little fish found to kill small ones by posing as family 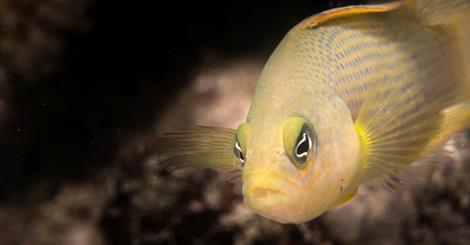 A little fish in the Australian Great Barrier Reef preys on smaller fish by masquerading as an adult of their own species, a study has found.

The dusky dottyback's disguise-accomplished by changing colors-also helps protect it from its own predators, according to the study, published in the latest issue of the journal Current Biology.

Tropical coral reefs like the Great Barrier are among the world's most colorful habitats. But that still puzzles scientists: Why do these reefs host so many colorful organisms such as corals, crustaceans and fish?

Animals commonly use deception to increase access to food, reproductive opportunities or protection, noted the study leaders, evolutionary biologists Fabio Cortesi and Walter Salzburger from the University of Basel in Switzerland. But an impostor risks being busted if it uses the fraud too often or out of context.

The researchers noticed that the dusky dottybacks (scientific name Pseudochromis fuscus) change their color to mimic different harmless fish species in their surroundings. But they can also change back again, “making it difficult for their prey to learn about the threat,” said Cortesi.

“This strategy is very similar to the classic example of the wolf in sheep's clothing. However, while the wolf may be found out eventually, dottybacks are able to change” again.

Changing color also protects them from their own predators, the investigators said. They trained bigger coral trout to strike at images of dottybacks in front of different backgrounds. The experiment found coral trout struck less often at dottyback images color-matched to the natural background of fish the dottyback mimicked.

It's “an intricate form of mimicry that not only gives them a predatory advantage but also protects them from their own predators,” Cortesi said.

Coral reef inhabitants show an almost inconceivable variety in color and shapes, many of which serve as warnings or increase protection from predators, he added. Stonefish hide by mimicking their surroundings, sea slugs use vivid colors to warn predators about their distastefulness and cuttlefish can change in a matter of seconds to either court potential sexual partners or to hide.