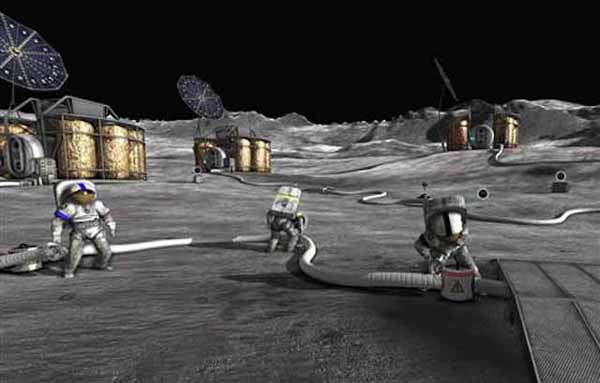 With an estimated 1.6 billion tons of water ice at its poles and plenty of rare-earth elements hidden below its surface, the Moon is rich ground for mining, a new report says.

In this month's issue of the magazine Physics World, science writer Richard Corfield describes how private firms and space agencies are dreaming of tapping into these lucrative resources.

Since NASA disbanded its manned Apollo missions to the Moon over 40 years ago, unmanned spaceflight has identified abundant water ice at the Moon's poles.

The article mentions Texas-based Shackleton Energy Company as one that plans to mine the ice and convert it into rocket propellant in the form of hydrogen and oxygen, which would then be sold to operators of spacecraft in low-Earth orbit.

The company's chief executive officer, Dale Tietz, told Corfield that the plan is to build a “gas station in space” where rocket propellant will be sold for a good deal cheaper than the cost of sending fuel from Earth. The company plans to extract the ice by sending humans and robots, and then to use some of the converted products to power mining hoppers, lunar rovers and life support for its own activities.

Moon Express, another privately funded company, is also interested in using water ice as fuel, the article says, but in a different form. It plans to fuel its operations and spacecraft using “high-test peroxide” which has a long history as a propellant.

As for mining the rare-earth elements on the Moon, China is making the most noticeable headway, according to the report. China's Jade Rabbit lander successfully touched down on the Moon in December 2013 and the Chinese space agency has publicly suggested establishing a “base on the Moon as we did in the South Pole and the North Pole.”

With a near-monopoly on the dwindling terrestrial rare-earth elements, which are vital for everything from mobile phones to computers and car batteries, it is no surprise that China may want to cast its net wider, according to the report. “All interested parties agree that the Moon-one step from Earth-is the essential first toehold for humankind's diaspora to the stars,” Corfield concludes.