Movie recreates in detail past visit to far-off moon 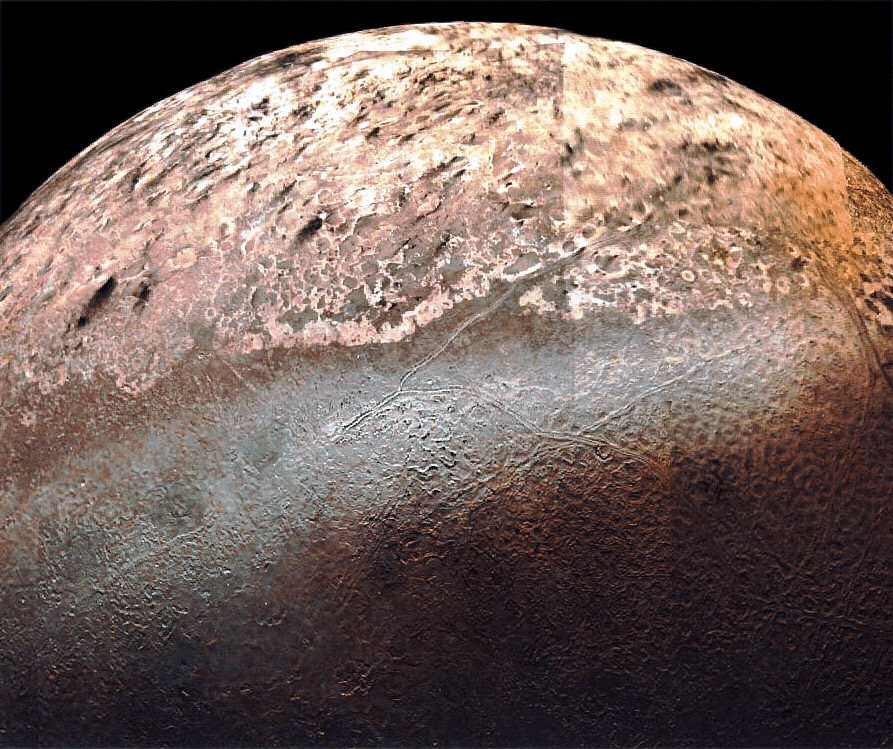 Using old footage, scientists working with NASA have made a movie said to realistically simulate a visit a quarter-century ago to a moon far out in the solar system.

NASA's Voyager 2 spacecraft flew by the planet Neptune and its moon Triton on Aug. 25, 1989, giving humanity its first close-up look at both. Now, Paul Schenk, a scientist at the Lunar and Planetary Institute in Houston, has used the footage to build what NASA calls the best global color map of the strange moon. The movie is based in turn on that map. Both are online here.

The map has enough detail to show features 1,970 feet (600 meters) apart. Colors were enhanced to bring out contrast but closely approximate the natural ones, according to the space agency. The movie shows only the moon's southern hemisphere clearly, because the moon didn't turn enough during the visit to clearly show both hemispheres and most of the northern side was in darkness that year.

The new project was inspired by anticipation of the agency's New Horizons encounter with Pluto, coming up a little under a year from now, according to NASA. Among the improvements are updates to the accuracy of feature locations, sharpening of feature details by removing some blurring effects of the camera, and improved color processing.

Although Triton is a moon of a planet and Pluto is a dwarf planet, scientists say Triton serves as a sort of preview for the upcoming Pluto encounter. Similarities are expected: the objects have similar overall makeup, and both came from the outer solar system. Yet they have very different histories: the slightly larger Triton fell into Neptune's orbit and Pluto didn't. Neptune's gravity causes tidal forces on its moon, heating it up and likely melting its interior, scientists explain, producing the volcanoes, fractures and other features that Voyager saw on that bitterly cold realm.

Voyager also found atmospheric plumes, or ejections of material, on Triton, making it one of the known “active” bodies in the outer solar system, along with objects such as Jupiter's moon Io and Saturn's moon Enceladus. Scientists will examine Pluto to see if it will join this list. That planned, brief encounter next July 14 will not be a replay of Voyager but more of a sequel and a “reboot,” according to NASA, with a new and more advanced spacecraft and a new cast of characters. Those are Pluto and its five known moons, all to be seen up close for the first time.