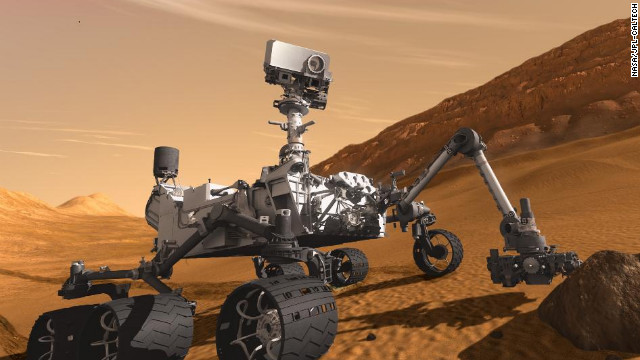 Throughout the course of history man has dreamed of stepping on other planets surface. They also spend billions of dollars in search for alien. The first and the foremost criteria for the existence of any alien life in a planet is the presence of liquid water on its surface because life can not exist without water. Now for the first time scientists of NASA  claim that they have found the liquid water on our neighbor planet, Mars.

NASA's Curiosity rover landed on Mars in 2012 and since then it is sending many valuable information to us. Recently, researchers of the Curiosity rover's science team believe they find evidence of liquid water on the Red Planet, lurking just beneath the surface. The water in the Martian soil seems to gather intermittently and is a very salty brine, making it perhaps suitable for everyone's favorite pet - sea monkeys!  Very, very hearty sea monkeys that could withstand the super-harsh environment of the planet.

Researchers used more than a year's of the rover's temperature and humidity measurements on the planet to determine that conditions were good during some Martian nights for a liquid brine to form.

This is all possible thanks to perchlorate, a type of salt found on Mars that has two helpful qualities -- it is essentially able to lure the water out of thin Martian air and also lowers its freezing point, forming a brief, wet overnight party beneath the surface that then dries up again in the morning when the sun heats things up.

The possible existence of such briny liquid on Mars has long been discussed, but it has been assumed that the best conditions would exist closer to the poles rather than at Curiosity's location nearer the planet's equator, where temperatures are higher. It still makes sense that the odds of finding brine in higher Martian latitudes are even more probable.

"Conditions near the surface of present-day Mars are hardly favorable for microbial life as we know it," Javier Martin-Torres said in a statement. Martin-Torres is the lead author of a paper on the research that was published this week in the journal Nature Geosciences. He's also a member of Curiosity's science team. "But the possibility for liquid brines on Mars has wider implications for habitability and geological water-related processes."

Though Curiosity may go down in history as the first successful dowser on Mars, there's still the issue of the horrid radiation that bombards the planet, making it impossible for all forms of life to exist on the surface, or at the shallow depths that can host the brine. Then again, if crazy life forms like the tardigrade can exist in extreme conditions including ultra-cold and high-radiation environments, then perhaps mutant, pickled sea monkeys from Mars aren't so far fetched.