NASA News : Finger like structures on the red planet 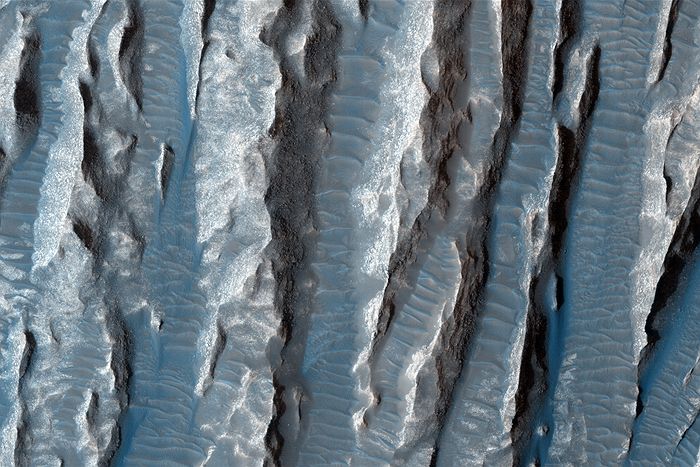 MRO circles Mars on a near polar orbit, 12 times a day, at an altitude of about 300 kilometres. On 7 February, MRO completed its 40,000th orbit around the red planet.

MRO is investigating seasonal and longer term changes on the Martian surface. It has already revealed that Mars is a far more dynamic and diverse world than was previously thought, with some regular warm season streaks resembling flowing water that provides the strongest evidence so far for liquid water on the red planet today.

The above image was captured by the HiRISE camera on MRO spacecraft on 4 January. These blueish, rocky finger like structures on the surface of Mars are called yardangs.

They're the remains of rocks that have been sandblasted into long, skinny fingers by particles blowing in the wind.

These unusual formations are located in the frozen windswept desert that is the Arsinoes Chaos region of Mars.

The Arsinoes Chaos is a giant 4000-kilometre long, 7-kilometre deep canyon system just south of the Martian equator, in the far east of the Valles Marineris,

This massive canyon - which stretches a quarter of the way around the planet - is believed to be a huge rift valley created by a tectonic crack in the Martian crust that formed as it thickened billions of years ago.

Scientists think this jumbled Arsinoes chaos terrain at the base of the canyon, was formed by massive water carved outflow channels that originated in this area and then flowed north onto the Martian northern lowland plains, which was the sea floor of an ancient ocean.

The grey and blue perpendicular sand dune ridges between the yardangs are called transverse aeolian ridges.

The aeolian ridges are about half way in height between sand dunes formed by saltating sand, and ripples formed by splashed sand grains.