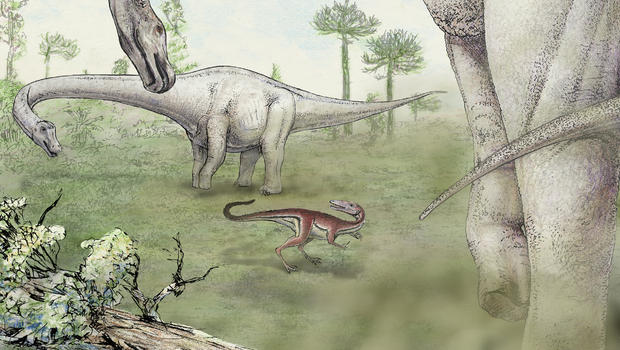 Scientists say they have discovered a fossil of the largest land animal whose weight can be accurately calculated. It's a dinosaur of a new species dubbed Dreadnoughtus schrani, and the calculation is possible because of the skeleton's exceptional completeness, the researchers say.

Although some relatives of the animal are thought to have been larger-weighing as many as 100 tons in the case of a lineage known as Argentinosaurus-they are known only from more fragmentary remains.

Researchers claim the D. schrani specimen weighed about 65 tons in life and measured 85 feet (26 meters) long, about the length of two city buses-though it was still a juvenile. The skeleton has over 70 percent of the bones, though no head, represented, the scientists reported.

Both it and Argentinosaurus belong to a group of plant eaters known as titanosaurs, named after the titans, a primeval race of giant gods from Greek mythology.

D. schrani “weighed as much as a dozen African elephants or more than seven T. rex. Shockingly, skeletal evidence shows that when this 65-ton specimen died, it was not yet full grown. It is by far the best example we have of any of the most giant creatures to ever walk the planet,” said Kenneth Lacovara of Drexel University in Philadelphia, who said he discovered the fossil skeleton in southern Patagonia in Argentina.

Lacovara and colleagues described the find Sept. 4 in the journal Scientific Reports. They unearthed the fossil over four excavation seasons from 2005 through 2009.