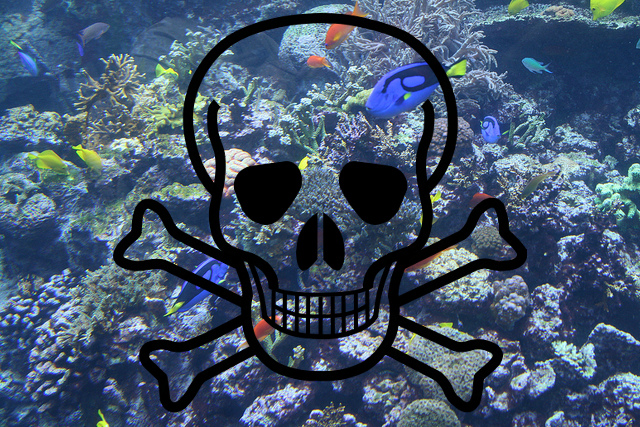 
The same pattern of events that led to the collapse of many wildlife populations on land is now at work in the oceans, a study warns.

Over the past five centuries, about 500 land-based animal species have gone the way of the dodo, dying out as a result of human activity, according to the researchers. In the ocean, where scientists count only 15 or so such losses, the numbers are much less dire. But that doesn't mean things aren't headed that way.

“We are setting ourselves up in the oceans to replay the process of wildlife Armageddon that we engineered on land,” said Douglas McCauley of the University of California Santa Barbara's Department of Ecology, Evolution and Marine Biology, lead author of a report on the findings.

The reason, he said, is that with activities such as industrialized fishing, “all signs indicate that we may be initiating a marine industrial revolution” like the one that occurred one land. Climate change makes matters worse, he added.

McCauley and colleagues found that today, wildlife populations in the oceans are as healthy as those on land were hundreds or thousands of years ago. However, they warn, that may change in the century ahead. Their findings are published Jan. 15 in the journal Science.

The new paper compares the march of the Industrial Revolution on land to current patterns of human use of the world's oceans. During the 1800s vast tracts of farmland and factories beat back forests and sucked up resources that were mined and drilled out of the ground. As a result, many land species were killed off. But in the ocean, fishing continued to rely on sailing ships clustered in small slivers of near-shore water.

That has now changed-“our tackle box has industrialized,” McCauley said. We now fish with helicopters, satellite-guided super trawlers and long lines that can stretch from New York to Philadelphia.

Co-author Steve Palumbi of Stanford University in California lists several emerging threats to the oceans. “There are factory farms in the sea and cattle-ranch-style feed lots for tuna,” he noted. “Shrimp farms are eating up mangroves with an appetite akin to that of terrestrial farming, which consumed native prairies and forest. Stakes for seafloor mining claims are being pursued with gold-rush-like fervor, and 300-ton ocean mining machines and 750-foot fishing boats are now rolling off the assembly line to do this work.”

One solution the paper highlighted involves setting aside more and larger areas of the ocean that are safe from industrial development and fishing. However, co-author Robert Warner, also of Santa Barbara, cautioned that reserves alone are not enough. “We need creative and effective policy to manage damage inflicted upon ocean wildlife in the vast spaces between marine protected areas,” he said.

Among the most serious threats cited to ocean life is climate change, which according to the scientists is degrading marine wildlife habitats and has a greater impact on these animals than it does on land animals. “Anyone that has ever kept a fish tank knows that if you crank up your aquarium heater and dump acid into the water, your fish are in trouble,” said co-author Malin Pinsky, an ecologist at Rutgers University in New Jersey. “This is what climate change is doing now to the oceans.”

Still, the researchers stressed, the oceans' relative health presents an opportunity for saving them. “Because there have been so many fewer extinctions in the oceans, we still have the raw ingredients needed for recovery,” said McCauley. “There is hope for marine species that simply does not exist for the hundreds of terrestrial wildlife species that have already crossed the extinction threshold.”

The ocean's future is yet to be determined, the researchers said. “We can blunder forward and make the same mistakes in the sea that we made on land, or we can collectively chart a different and better future for our oceans,” Warner concluded.