Parrot found to "teach" tool use to others 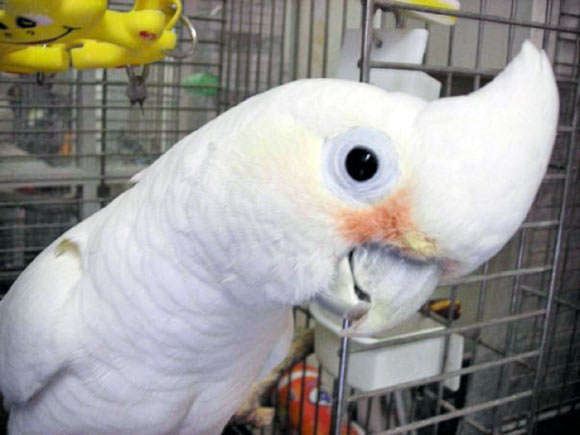 Goffin's cockatoos, a type of parrot, can not only make and use tools but also teach others to do the same, a study concludes.

Scientists had previously concluded that the birds could figure out how to make and use their own tools after a captive Goffin's cockatoo called Figaro surprised them by sculpting splinters from a wooden beam into tools. He used those to get food and toys that were out of his reach.

“He sculpted the splinters as necessary by adjusting their dimensions in order to retrieve play or food objects out of his reach,” scientists explained in the new study, published Sept. 5 in the journal Proceedings of the Royal Society B.

Their research found that other cockatoos could pick up the technique from Figaro. They tested six male and six female hand-raised cockatoos, none of whom were known to use tools previously.

Half the group, three males and three females, watched Figaro demonstrating how to use sticks to get food. The rest didn't watch that but instead viewed a “ghost” demonstration that enabled them to get the food without tools: hidden magnets brought the treat into reach.

After several sessions, those who saw Figaro's example were more likely to pick up and try to use the tools than the others, the study found. According to the scientists, the males in the group all managed to nab the food by the end of five demonstration sessions, and seemed to have learned the skill from Figaro.

Two of the males who learned how to use the tools were also tested to see if they could figure out how to make their own tools, the investigators reported. One of the males spontaneously made his own tools without having seen Figaro making one, and the other learned after seeing Figaro's example.

Although a few apparent examples had been observed in the wild of birds spreading tool use, the behavior hasn't been studied under controlled conditions, said the scientists, from the University of Vienna, the University of Oxford and the Max Planck Institute for Ornithology in Seewiesen, Germany.

They added that the parrots weren't just copying Figaro but learning to emulate his results. The birds observing Figaro used slightly different techniques with the tools to drag the food into reach-techniques which the researchers say were arguably better than Figaro's demonstration.