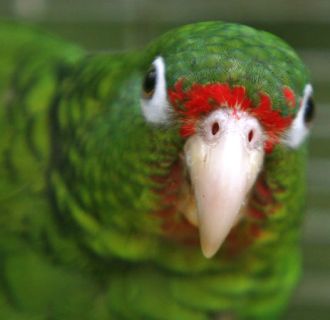 Goffin cockatoos, a curious parrot species, can choose the correct answer in a task by ruling out wrong alternatives, a study has found.

Researchers from the University of Vienna set out to develop a game that could test this ability in different species. Developing this game was not an easy puzzle itself.

One of the problems of previous studies, they said, was to exclude the possibility that animals chose a new answer, or stimulus, just out of curiosity rather than by excluding known wrong answers.

The researchers turned to a touch screen computer to present the test material.

In the task, the Goffins had to learn to associate a picture with a reward that they would receive right after touching the picture. Another, accompanying picture would net no reward.

During the training, the unrewarded picture occasionally was replaced by new, unknown picture. Only once the birds reliably chose the “good” pictures over the wrong or new ones were they tested for their inference skills. This was meant to ensure that the cockatoos wouldn't choose new pictures just out of curiosity.

In the following tests, various combinations of novel and known pictures, which could be rewarded or unrewarded, were presented. Their performance allowed the researchers to tell apart other strategies that the birds may have used.

“More than half of our cockatoos choose their pictures in a way that clearly indicates the ability of infer by exclusion about rewarded stimuli. However alternative strategies also play an important role,” said Mark O'Hara of the university, who developed the task with colleagues.

“Considering the cockatoos' capacities in previous tasks we actually expected that they would show inferences by exclusion, but this was the first test if we could detect this ability with our new task. That we could show this sort of reasoning, together with other strategies… lets us hope that the method will be applicable to many species and ultimately might help us to understand something about the evolution of this ability,” he added.

The study is published in the research journal PLoS One.