Past global warmings were good times for sea crocs 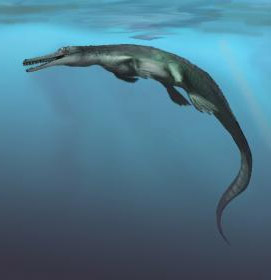 Past episodes of naturally caused global warming were golden opportunities for sea crocodiles to spread, according to a new study. The work found that ancestors of today's crocodiles colonized the seas during warm phases and became extinct during cold ones.

Today, crocodiles are so-called cold-blooded animals living mainly in fresh waters, though two species are exceptions that venture occasionally into the sea-Crocodylus porosus and Crocodylus acutus. Because crocodiles live in tropical climates, their fossils are often used as markers of warm conditions.

While only 23 crocodile species live today, there were hundreds in the past, according to scientists. And four times in the past 200 million years, major lineages entered the seas, then died out.

“There seems to be a common pattern” behind these events, said Jeremy Martin, lead author of the new study, published this week in the journal Nature Communications. The work “shows that for crocodilians, warming phases of our earth's history constitute ideal opportunities to colonize new environments,” added co-author Michael Benton of the University of Bristol.

Martin, from the University of Lyon in France and formerly of the University of Bristol, U.K., worked with paleontologists and geochemists from both institutions to chart the number of marine crocodilian fossil species as compared to sea temperatures. To map these past temperatures, the scientists exploited past findings showing that the temperatures affect the atomic structure of the oxygen in fish fossils.

They found that crocodiles first colonized the seas about 180 million years ago during a period of ocean global warming. These animals died about 25 million years later during a cold spell, but another crocodilian lineage re-colonized the marine environment during a later period of warming. But one fossil lineage doesn't seem to follow the trend, they said-Jurassic metriorhynchoids didn't die out during the cold spells of the early Cretaceous, unlike the teleosaurids, another group of marine crocodilians.