Rosetta arrives at comet for a close-up look 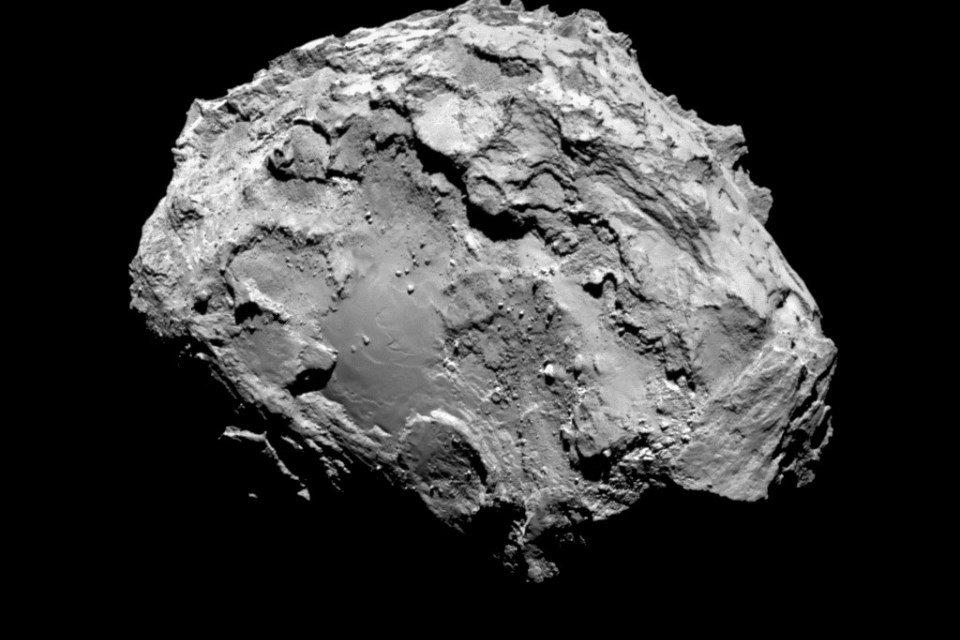 A European Space Agency spacecraft has become the first to reach a comet for a close-up view, coming within 100 km (60 miles) on Aug. 6 and preparing for an even closer approach, scientists report.

The event follows a decade-long journey. “After ten years, five months and four days travelling towards our destination, looping around the Sun five times and clocking up 6.4 billion kilometres, we are delighted to announce finally ‘we are here,'” said Jean-Jacques Dordain, the agency's director general, on Aug. 6.

“Rosetta is now the first spacecraft in history to rendezvous with a comet, a major highlight in exploring our origins. Discoveries can start.” Mission scientists plan to direct the craft closer over the next six weeks, putting it within half its current distance. Later plans include having it deposit a lander directly on the comet.

Comet 67P/Churyumov-Gerasimenko and Rosetta now lie 405 million km (250 million miles) from Earth, about half way between the orbits of Jupiter and Mars, rushing towards the inner Solar System at nearly 55,000 km (34,000 miles) per hour.

The comet orbits the sun once every 6.5 years. The path takes it from beyond Jupiter at its furthest point, to between the orbits of Mars and Earth at its closest to the Sun. Rosetta is planned to accompany it for over a year as they swing around the Sun and back out towards Jupiter again.

Comets are considered to be primitive building blocks of the Solar System and may have helped to ‘seed' Earth with water, perhaps even the ingredients for life, according to scientists. But many fundamental questions about these enigmatic objects remain, and Rosetta is aimed at answering some of these.

Its journey to the comet wasn't straightforward. Since its launch in 2004, Rosetta had to make three gravity-assist flybys of Earth and one of Mars to help it on course to its rendezvous with the comet. This complex course also allowed Rosetta to pass by asteroids Šteins and Lutetia, obtaining unprecedented views and information on these two objects.

Aug. 6 saw the last of a series of ten manoeuvres that began in May to adjust Rosetta's speed and trajectory gradually to match those of the comet. Had any of these failed, the mission would have been lost, and the spacecraft would simply have flown by the comet.

The comet began to reveal its personality while Rosetta was on its way. Images taken between late April and early June showed that its activity was variable. The comet's “coma” – a surrounding area of gas and dust – became quickly brighter and then died down again over those six weeks. Measurements suggested that the comet was losing water vapour to space at about 300 milliliters (1.3 U.S. cups) per second, and that its average temperature was about minus 70 degrees C (minus 94 degrees F), pointing to a “dark and dusty” surface, astronomers said.

Then, images taken from about 12,000 km (7,000 miles) away began to reveal that the nucleus, or core of the object comprises two distinct segments joined by a ‘neck', giving it a duck-like appearance. Subsequent images showed more and more detail.

“Our first clear views of the comet have given us plenty to think about,” said Matt Taylor, the European Space Agency's Rosetta project scientist. “Is this double-lobed structure built from two separate comets that came together in the Solar System's history, or is it one comet that has eroded dramatically and asymmetrically over time? Rosetta, by design, is in the best place to study one of these unique objects.”

Eventually, Rosetta is to attempt a close, near-circular orbit at 30 km (19 miles) and, depending on the comet's activity, perhaps come even closer.

“Arriving at the comet is really only just the beginning of an even bigger adventure, with greater challenges still to come as we learn how to operate in this uncharted environment, start to orbit and, eventually, land,” said Sylvain Lodiot, the agency's Rosetta spacecraft operations manager.

As many as five possible landing sites are to be identified by late August. “In addition to characterizing the comet nucleus and setting the bar for the rest of the mission, we will begin final preparations for another space history first: landing on a comet,” said Taylor.

“After landing, Rosetta will continue to accompany the comet until its closest approach to the Sun in August 2015 and beyond, watching its behaviour from close quarters to give us a unique insight and real-time experience of how a comet works as it hurtles around the Sun.”