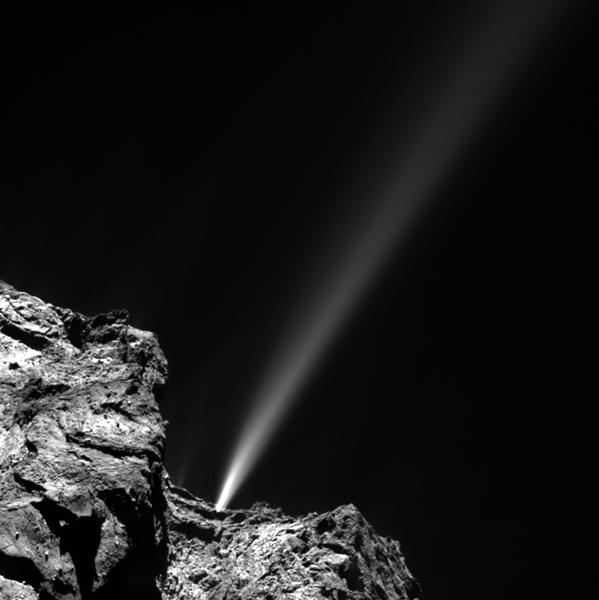 A comet under a spacecraft's close watch is starting to give off “fireworks” as its path takes it near the Sun, according to European Space Agency scientists in charge of the mission.

The scientists said the craft, Rosetta, has witnessed growing activity from Comet 67P/Churyumov–Gerasimenko. One outburst proved so strong, they said, that it even pushed away the incoming solar wind, a rapid stream of electrically charged particles from the Sun that pervades the Solar System.

The comet reaches “perihelion” on Thursday-the moment in its 6.5-year orbit when it is closest to the Sun. In recent months, the increasing solar energy has been warming the comet's frozen ices, turning them to gas, which pours out into space, dragging dust along with it.

The period around perihelion draws great scientific interest, as the intensity of the sunlight increases and parts of the comet previously cast in years of darkness are flooded with sunlight.

The comet's general activity is expected to peak in the weeks following perihelion, much as the hottest days of summer usually come after the longest days. But sudden and unpredictable outbursts can occur at any time – as already seen.

On July 29, Rosetta observed the most dramatic outburst yet, registered by several of its instruments from their vantage point 186 km (116 miles) from the comet. They imaged the outburst erupting from the nucleus, or core; witnessed a change in the structure and makeup of the gaseous cloud or “coma” surrounding Rosetta; and detected increased levels of dust impacts.

A sequence of images taken by a Rosetta camera dubbed OSIRIS show a jet-like feature bursting out of the side of the comet's neck, in a region of the comet known as Anuket. It was first seen in an image taken at 1:24 p.m. Greenwich Mean Time, but not in an image taken 18 minutes earlier, and has greatly faded in an image captured 18 minutes later. The camera team estimates the material in the jet to be traveling at least 10 meters (yards) per second, and perhaps much faster.

“Usually, the jets are quite faint compared to the nucleus and we need to stretch the contrast of the images to make them visible – but this one is brighter than the nucleus.”