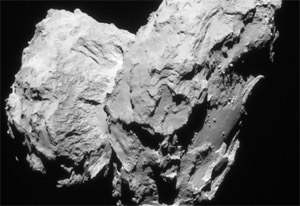 The reason for the odd form has been a mystery since the agency's spacecraft Rosetta, visiting the comet, revealed the shape in July 2014.

Researchers attributed the shape either to a long-ago merger, or to erosion of a single comet to create a “neck.”

Now, scientists say it's clear that separate comets collided, somewhat slowly, to form 67P. The researchers analyzed close-up images to study layers of material seen all over the comet's nucleus, or core.

The images show “an outer envelope of material organized in distinct layers… we think these extend for several hundred meters,” or yards, deep, said Matteo Massironi, lead author from the University of Padova, Italy, and an associate scientist with Rosetta's OSIRIS camera system.

The layers are “a bit like an onion”-or rather, “two separate onions of differing size” that grew separately before squashing together, he said. The findings are reported in the research journal Nature and were presented Sept. 27 at the European Planetary Science Congress in Nantes, France.

Massironi and colleagues used images snapped between Aug. 6 of last year and March 17 of this year to identify over 100 terraces, or step-like landforms, on the surface of the comet, and parallel layers of material in exposed cliff walls and pits. They then used a model to work out thei directions and depth of these layers.

It soon became clear, they said, that they were coherently arranged all around the comet's lobes, or distinct “halves” of the dumbbell, and in some places about 650 meters deep.

“This was the first clue that the two lobes are independent,” Massironi said. Another: “the layers are inclined in opposite directions close to the comet's neck,” whereas their direction would be consistent if it had formed as a single object.

“We also looked at the relationship between the local gravity and the orientations of the individual features all around the reconstructed comet surface,” he added.

In one case, they modeled the comet as a single body, as it is now. In the other, they modeled it as if it were two separate comets, each with its own gravitational field centered more or less at the middle. The layers, the researchers said, made more sense in the second picture.

But “it must have been a low-speed collision” to avoid disrupting the layers more than they have been, Massironi said. Moreover, “the striking structural similarities” between the two parts suggest they “formed through a similar accretion process,” added co-author Bjorn Davidsson of Uppsala University, Sweden. “Layering has also been observed on the surface of other comets during previous flyby missions.”