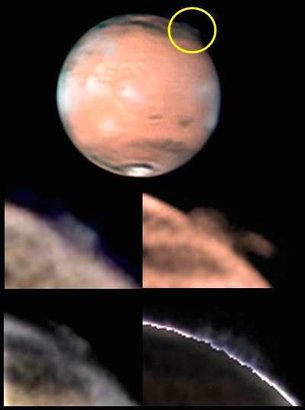 Scientists are reporting that they can't figure out the cause of mysterious plumes, or cloudy features, photographed high up over Mars by amateur astronomers.

Amateurs provided images showing the features on two separate occasions in March and April 2012, according to scientists. The plumes rose to over 250 km (155 miles) over the Red Planet's surface, in the same region both times-a height over twice that of any similar features seen in the past, they added. It's also about 10 times the record heights for airplane flight on Earth.

The Martian atmosphere is almost vanishinly thin at the height of these plumes, which makes them “extremely unexpected,” said Agustin Sanchez-Lavega of the Universidad del PaĒs Vasco in Spain, lead author of a paper reporting the results in the journal Nature.

The scientists checked archived Hubble Space Telescope images and amateur images for similar events. These revealed occasional clouds, but usually only up to 100 km high.

The features in 2012 developed in less than 10 hours, scientists said, often covering an area more than twice as wide as their height, and stayed visible for around 10 days, changing from day to day. None of the spacecraft around Mars saw the features because of their positions and the lighting conditions.

But one set of Hubble images from May 17, 1997, the investigators said, revealed an abnormally high plume, similar to that spotted by the amateur astronomers in 2012. Scientists are now working on determining the nature and cause of the plumes by using the Hubble data in combination with the images from amateurs.

Agustin said scientists have a couple of ideas so far, but neither seems very likely.

“One idea we've discussed is that the features are caused by a reflective cloud of water-ice, carbon dioxide-ice or dust particles, but this would require exceptional deviations from standard atmospheric circulation models to explain cloud formations at such high altitudes,” he said.

“Another idea is that they are related to an auroral emission,” he said, or lighting effects caused by the interactions of solar particles with a magnetic field. Scientists are hoping for further insights after the arrival of a European Space Agency satellite at Mars, called the ExoMars Trace Gas Orbiter. That's scheduled for launch next year.