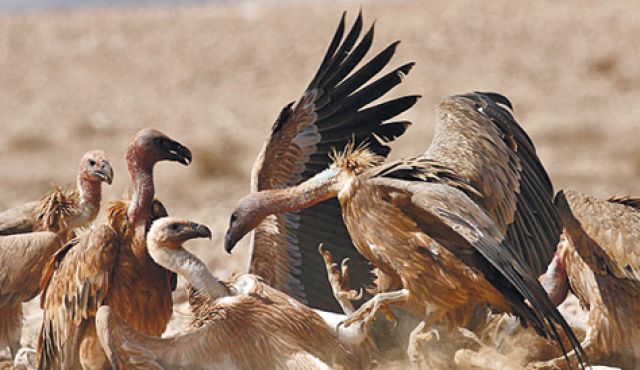 Some extreme adaptations-including very strong stomach acid-help vultures live on rotting, often poop-contaminated meat that would poison or kill most other animals, a study has found.

When vultures eat lunch they happily strip rotting carcasses to the bone. If a hide is too tough to bite through, they don't hesitate to enter a carcass using other routes, including the back entrance-the anus. What ingredient this adds to the feast is not hard to see.

Yet the birds are apparently immune to the resulting cocktail of deadly microbes in their dinner such as Clostridia, Fuso- and Anthrax-bacteria.

“To investigate vultures' ability to survive eating this putrid cocktail, we generated DNA profiles from the community of bacteria living on the face and gut of 50 vultures from the U.S.A.,” said researcher Lars Hestbjerg Hansen of Aarhus University in Denmark.

“Our findings enable us to reconstruct both the similarities, and differences, between the bacteria found in turkey vultures and black vultures, distributed widely in the Western Hemisphere.”

On average, the researchers found vultures' facial skin contained DNA from 528 different types of microorganisms, but the gut revealed DNA from only 76 types. A lot of them are getting killed on the way down, said Roggenbuck and colleagues, whose findings are published in the journal Nature Communications.

“There has been strong adaptation in vultures when it comes to dealing with the toxic bacteria they digest. On one hand vultures have developed an extremely tough digestive system, which simply acts to destroy the majority of the dangerous bacteria they ingest,” he explained.

“On the other hand, vultures also appear to have developed a tolerance towards some of the deadly bacteria-species that would kill other animals actively seem to flourish in the vulture lower intestine.”

These observations, the researchers said, raise the question of whether the Clostridia and Fusobacteria in the gut simply outcompete the other bacteria without benefitting the bird, or in contrast, if their presence actually confers dietary advantages for the vultures. The results, they say, suggest it's probably a bit of both-the surviving bacteria probably outcompete the other microbes, but also provide the birds with important nutrients by helping to break down the carrion.

The universe of microbes within the avian gut is not well understood but “it is not unreasonable to suppose that the relationship between birds and their microbes has been as important in avian evolution as the development of powered flight and song,” said Gary Graves of the Smithsonian Institution's National Museum of Natural History in Washington, who participated in the work.