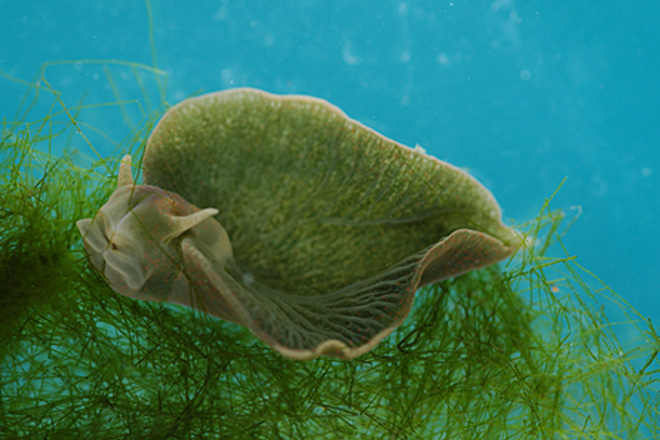 A bright green sea slug manages to live like a plant, “feeding” on sunlight-thanks to genes it steals from the algae it eats, scientists say.

The trick enables the slug, which even looks like a plant, to skip meals for months at a time, as well as pass some of the stolen genes on to its offspring, according to the researchers.

A study on the findings was published Dec. 1 in the journal Biological Bulletin.

“There is no way on earth that genes from an alga should work inside an animal cell,” said study co-author Sidney K. Pierce, an emeritus professor at University of South Florida and at University of Maryland, College Park.

“And yet here, they do. They allow the animal to rely on sunshine for its nutrition. So if something happens to their food source, they have a way of not starving to death until they find more algae to eat.”

Algae are very simple forms of plants. By gathering their genes, Pierce and colleagues said, the slug helps to sustain photosynthesis inside itself-the process of gathering energy from sunlight. Importantly, they added, this is one of the only known examples of an animal using genes borrowed from another species. That's basically the goal of gene therapy to correct genetic diseases in humans.

“Is a sea slug a good [biological model] for a human therapy? Probably not. But figuring out the mechanism... could be extremely instructive for future medical applications,” Pierce said.

The scientists used an advanced imaging technique to confirm that a gene from an alga called V. litorea gets into the E. chlorotica slug's chromosome. This gene makes an enzyme, or a type of molecule, needed by microscopic photosynthetic “machines” called chloroplasts typically found in plants and algae.

It has been known since the 1970s that E. chloritica “steals” chloroplasts from V. litorea (a process called “kleptoplasty”) and embeds them into its own digestive cells. Once inside the slug cells, the chloroplasts continue to photosynthesis for up to nine months-much longer than they would perform in the algae. The photosynthesis process produces carbohydrates and lipids, nutrients that feed the slug.

How the slug manages to maintain these photosynthetic structures for so long has been a topic of controversy, according to Pierce. “This paper confirms that one of several algal genes needed to repair damage to chloroplasts, and keep them functioning, is present on the slug chromosome,” he said.