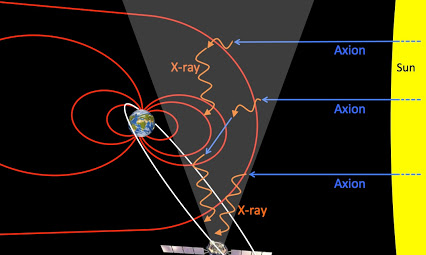 Space scientists have measured a curious signal that they say might come from the mysterious “dark matter,” an invisible substance detected so far only through its gravity.

The researchers at the University of Leicester in the U.K. reported what seems to be a signature of particles thought to possibly make up dark matter, called axions. The scientists speculate that the Earth's magnetic field is turning some of these into X-rays.

“If confirmed, it will be the first direct detection and identification of the elusive dark matter particles and will have a fundamental impact on our theories of the Universe,” said University of Leicester physicist Martin Barstow, who is also President of the Royal Astronomical Society.

In a study to be published Oct. 20 in the journal Monthly Notices of the Royal Astronomical Society, the scientists said the signal has no conventional explanation. The first author of the study, George Fraser of the University of Leicester, died last March.

“The direct detection of dark matter has preoccupied physics for over thirty years,” Fraser wrote. Dark matter, a kind of invisible mass of unknown origin, cannot be seen directly with telescopes, but is instead inferred from its gravitational pull. It is believed to make up most of the matter of the Universe.

Fraser and colleagues worked by studying the X-ray background, the sky as viewed in X-ray light.

“The X-ray background ¢ the sky, after the bright X-ray sources are removed ¢ appears to be unchanged whenever you look at it,” explained Andy Read, lead author of the paper, also from the University of Leicester. But “we have discovered a seasonal signal in this X-ray background, which has no conventional explanation, but is consistent with the discovery of axions.”

“It appears plausible that axions ¢ dark matter particle candidates ¢ are indeed produced in the core of the Sun and do indeed convert to X-rays in the magnetic field of the Earth,” the scientists wrote in the paper. “It is predicted that the X-ray signal due to axions will be greatest when looking through the sunward side of the magnetic field because this is where the field is strongest.”

“These exciting discoveries, in George's final paper, could be truly ground breaking, potentially opening a window to new physics, and could have huge implications, not only for our understanding of the true X-ray sky, but also for identifying the dark matter that dominates the mass content of the cosmos,” Read said.