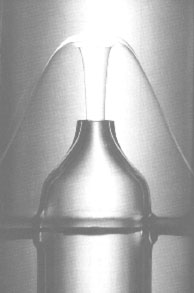 Superfluids do exactly the same thing. Superfluidity is a state of matter in which the matter behaves like a fluid with zero viscosity; where it appears to exhibit the ability to self-propel and travel in a way that defies the forces ofgravity and surface tension. While this characteristic was originally discovered in liquid helium, it is also found in astrophysics, high-energy physics, and theories of quantum gravity. The phenomenon is related to the Bose–Einstein condensation, but it is not identical: not all Bose-Einstein condensates can be regarded as superfluids, and not all superfluids are Bose–Einstein condensates.

In liquid helium, the superfluidity effect was discovered by Pyotr Kapitsa and John F. Allen. It has since been described through phenomenological and microscopic theories. In liquid helium-4, the superfluidity occurs at far higher temperatures than it does in helium-3. Each atom of helium-4 is a boson particle, by virtue of its zero spin. A helium-3 atom, however, is a fermion particle; it can form bosons only by pairing with itself at much lower temperatures. This process is similar to the electron pairing in superconductivity.

The idea that superfluidity exists inside neutron stars was first proposed by Arkady Migdal. By analogy with electrons inside superconductorsforming Cooper pairs due to electron-lattice interaction, it is expected that nucleons in a neutron star at sufficiently high density and low temperature can also form Cooper pairs due to the long-range attractive nuclear force and lead to superfluidity and superconductivity.