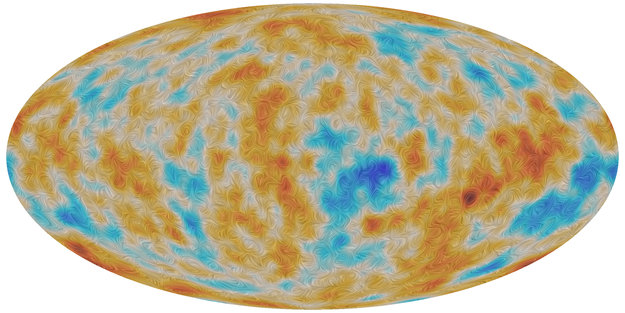 The satellite maps so-called polarized light across the sky-light believed to have been traveling toward us since the almost dawn of time, and providing a certain view of the early universe.

The findings were described in 15 papers submitted to the research journal Astronomy & Astrophysics last week.

The history of our Universe is a 13.8 billion-year tale that scientists try to read by studying the planets, asteroids, comets and other objects in our Solar System, and by looking at distant stars, galaxies and the material between them.

Important information comes from the Cosmic Microwave Background, “fossil light” believed to come from when the Universe was hot, thick, foggy soup, some 380,000 years after its birth in a “Big Bang.” Because the universe is still expanding from that initial explosion, scientists believe, the light waves in it expand also. As a result this light reaches us in a lower-energy form knows as microwave light.

Between 2009 and 2013, Planck surveyed the sky to study this light in unprecedented detail, project physicists explain. Tiny differences in its temperature trace regions of slightly different density, or compactness, in the early cosmos-thought to represent the seeds of future stars and galaxies.

The light also carries further clues “encoded in its æpolarization',” or the orientation of its waves, said Jan Tauber, the agency's Planck project scientist. A detailed, full-sky measurement of this polarization led to “the unique maps” now released, he added.

Light is polarized when its many waves tend to all vibrate in the same direction. This may arise as a result of photons ¢ the particles of light ¢ bouncing off other particles, which is thought to be what happened in this case.

The scientific account goes like this. The photons were originally trapped in a hot, thick, foggy soup of particles which, by the time the Universe was a few seconds old, consisted mainly of bits of atoms called electrons, protons and neutrinos. Slowly but surely, the universe expanded, cooling down in the process, and the “fog” lifted. This had two results: the particles called electrons and protons could combine and form atoms without being destroyed by light particles bumping into them. And photons, the light particles themselves, had room to travel without bumping into the atoms. And the light could get to us.

But the light is also thought to retain a memory of its last encounter with the electrons-a memory encoded in its polarization.

As the background light traveled through space and time the first stars also left a mark on it, physicists say. That also affects the polarization, they add, and this data now indicates that these stars started to shine about 550 million years after the Big Bang-ending the foggy “Dark Ages.”

That is more than 100 million years later than previously thought, but actually helps to solve a problem, the physicists said. That's because the previous time estimates conflicted with deep images of the sky, indicating that the earliest known galaxies could not have been powerful enough to end the dark ages much earlier.

One disappointment that has emerged: dust from our own galaxy is obscuring a lot more of the early-universe picture than was hoped, said Torsten En▀lin, leader of the Planck technical team at the Max Planck Institute for Astrophysics.

“Polarized emission from dust in our Milky Way is significant over the entire sky, dashing earlier hopes that some areas might be clean enough to offer an uncontaminated view of the early universe,” he said. On the bright side, he noted, that same dust offers interesting information about galactic weather.