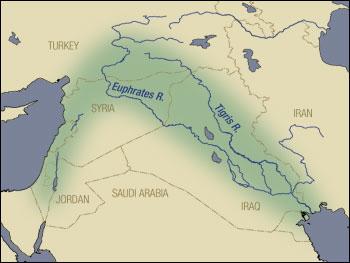 Researchers have published the first major study to draw a link between global warming and ongoing civil unrest or war.

The study suggests a link between global warming-related climate trends and severe drought in the Fertile Crescent region that preceded civil unrest in Syria. However, the report also points to farming practices as a factor exacerbating the dry conditions.

The Fertile Crescent is a quarter-moon-shaped zone of relatively moist and fertile land that includes what are today large parts of Iraq and Syria.

Syria's ongoing internal conflict began in 2011, following three years of the most severe drought recorded in the region, scientists said.

To investigate the drought's causes, Colin P. Kelley of the University of California, Santa Barbara and colleagues examined century-long trends in precipitation, temperature, and sea-level air pressure in the region.

Their findings are published in this week's early online issue of the research journal Proceedings of the National Academy of Sciences.

The investigators concluded that the recent decrease in rainfall in Syria is likely part of a long-term drying trend, linked with increasing sea-level pressure in the eastern Mediterranean Sea. Both these trends were accompanied by warming, and the drying and warming trends were consistent with simulated climate responses to greenhouse gas-related climate warming, according to Kelley and colleagues.

Releases of those gases into the atmosphere are blamed for global warming.

Farming practices prior to the drought likely contributed to groundwater depletion, and the drought was followed by agricultural collapse and internal displacement of up to 1.5 million people who moved from rural farmland to urban centers, according to the researchers. They add that the results suggest links among drought, global warming-related climate trends, and the Syrian unrest.