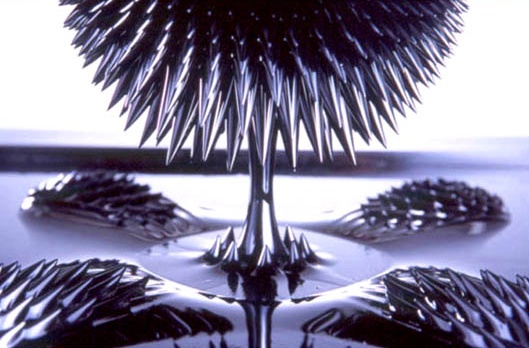 Do you know what happens if you suspend nanoparticles of iron in water or oil? It creates a strange substance called ferofluid, which shows different interesting properties. A ferrofluid is a liquid that reacts to magnetic fields in trippy ways that make you think that science is both magical and potentially evil. The name ferofluid come from Iron or Ferrum.  If there is no Magnetic field applied on them then they will behave as normal fluid. But in presence of magnetic field the iron particles inside it align to it and makes an interesting shape.

Ferrofluids are used for different perpuses

Use in electronic devices : Ferrofluids are used to form liquid seals around the spinning drive shafts in hard disks. The rotating shaft is surrounded by magnets. A small amount of ferrofluid, placed in the gap between the magnet and the shaft, will be held in place by its attraction to the magnet. The fluid of magnetic particles forms a barrier which prevents debris from entering the interior of the hard drive. According to engineers at Ferrotec, ferrofluid seals on rotating shafts typically withstand 3 to 4 psi; additional seals can be stacked to form assemblies capable of higher pressures.

Use in mechanical : Ferrofluids have friction-reducing capabilities. If applied to the surface of a strong enough magnet, such as one made of neodymium, it can cause the magnet to glide across smooth surfaces with minimal resistance.

Spacecraft propulsion : Ferrofluids can be made to self-assemble nanometer-scale needle-like sharp tips under the influence of a magnetic field. When they reach a critical thinness, the needles begin emitting ion jets that can be used as a thruster mechanism to propel small satellites.

Ferrofluid art : Some art and science museums have special devices on display that use magnets to make ferrofluids move around specially shaped surfaces in a fountain show-like fashion to entertain guests. Sachiko Kodama is known for her ferrofluid art.

The Australian electronic rock band Pendulum used ferrofluid for the music video for the track, Watercolour. The design house Krafted London was responsible for the ferrofluid FX in the video. The post-metal band Isis also uses a ferrofluid in the music-video for 20 Minutes/40 Years.

Martin Frey, a German designer and technologist, built the pixel-based Ferrofluid Display SnOil in 2005. The device consists of a 12 x 12 electro magnets matrix, allowing the apparatus to display text and run simple games.

CZFerro, an American art studio, began using ferrofluid in its productions in 2008. The works consist of ferrofluid displayed in a unique suspension solution. These works are often used asconversation pieces for offices and homes.