Why bubbles in dark beer sink rather than rise? 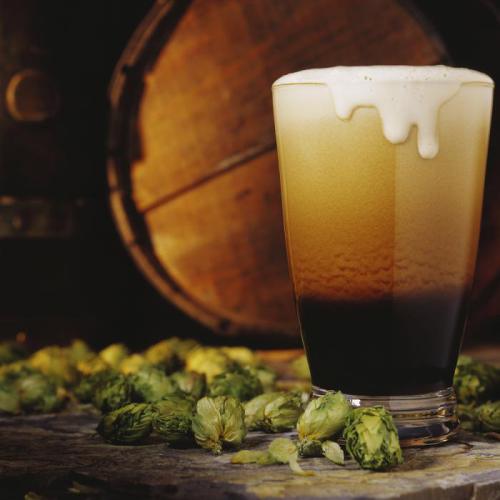 One riddle of human existence has been a cold case for years-but we can finally put this one away, according to three scientists. They claim to have solved the puzzle of why bubbles in dark beer sink rather than rise, as common sense, and a cursory grasp of physics, suggest they should.

Their answer in a nutshell: paradoxically, bubbles in dark beer fall because they're trying to go up. But in trying, they create currents that enable some of them rise only at the expense of other, more clearly visible ones, which instead drop. The shape of the glass, meanwhile, plays a key role, said the investigators, who studied perhaps the best-known brand of stout, Guinness.

“The sinking bubbles of Guinness and other stout beers have intrigued beer drinking physicists and their students for some time,” wrote Eugene Benilov, Cathal Cummins and William Lee of the University of Limerick in Ireland, reporting their findings.

Four years ago, Youxue Zhang and Zhengjiu Xu of the University of Michigan declared that the much smaller bubble sizes characteristic of dark beers is a key clue in the mystery. Bubbles want to go up because, being little balls of gas, they're lighter than the surrounding liquid. But the upward drive is weaker if the bubble is smaller. If the liquid happens to be flowing the opposite way, all it takes is for the liquid speed to exceed the bubble speed-and the bubble will be forced to go with the flow.

“Because of their small size, the bubbles in Guinness beer rise slowly and hence can be entrained by downward flow if the downward flow velocity exceeds the small velocity of rising bubbles,” Zhang and Xu wrote, reporting their work in the Feb. 2008 issue of the journal Elements.

But why would there be a downward flow? Benilov and colleagues believe they have unraveled that one.

When a fizzy drink is poured, many bubbles form when the liquid hits the bottom of the glass. If we assume for simplicity's sake that they form uniformly all over the bottom, then they would also rise in a uniform column throughout the drink, Benilov and colleagues explain in their paper, posted on arXiv.org, an online physics research database.

But one factor, primarily, disrupts this uniformity, they say: they shape of the glass. The standard pint glass typically used for Guinness in bars is-like many glasses-narrow at the bottom, wider near the top. Since bubbles from the bottom rise approximately straight upward, then as the glass widens, the area near the walls finds itself with a shortage of bubbles compared to the middle of the glass.

This thicker concentration of bubbles in the central axis of the glass has great consequences for the outlying bubbles near the edges, they claim: these fringe elements are pushed downward in order to allow their more mainstream brethren to reach the top.

The key to understanding why this happens is that “whichever way the bubbles move, they exert a drag force on the surrounding liquid”-they carry the liquid with them to some degree, they explained. But of course, the whole sopping mass of beer can't simply lift itself out of the glass just thanks to a lift offered by its bubbles. So if some bubbles do manage to push the liquid upward in their little area of the receptacle, that liquid must fall back down in another area.

Thus a current arises, Benilov and colleagues argue: beer in the central column goes up, because there are more bubbles there. Beer near the sides goes down, because there are fewer bubbles there. The little, outlying orbs suffer the consequences as their upward struggle is more than counterbalanced by the downward speed of the liquid. These bubbles, being near the edge, are the ones we see most clearly, especially in a freshly poured glass.

The beer experiments are more than fun and games, Benilov and colleagues said; there are industrial uses to understanding how bubbles behave. Zhang and Zu wrote in their 2008 paper that the “fizzics” of bubbles, as they dubbed it, is also relevant to understanding explosive volcano eruptions-as well as lake eruptions such as a 1986 disaster at Lake Nyos Cameroon. In that tragedy, 1,700 people suffocated after more than a million tons of carbon dioxide burst out of the lake.